Tyson Apostol, a 34-year-old former pro cyclist from Provo, Utah, won CBS’s “Survivor: Blood vs. Water”, netting one million dollars and the title of “sole survivor” in a live broadcast on the CBS Television City lot on Fairfax on Sunday night.

This was Apostol’s third time on the show, having previously competed on seasons that aired in spring 2009 and spring 2010.

“Every other time I’ve come (home) fatter because they send me on a trip or put me in (voted off contestant’s sequester camp) Ponderosa,” Apostol told TheWrap backstage after the show. “I come home all bloated and gross looking. This time I had a super dope tan and was also super thin. And I was still sick, my stomach was sick a little bit. So (my loved ones) had a pretty good hint that I had made it far.”

The votes came in as an 8-1 landslide over Monica Culpepper, a 42-year-old mother and returning player from Tampa, Florida, and a player from the original first season of the show in the summer of 2000, Gervase Peterson. 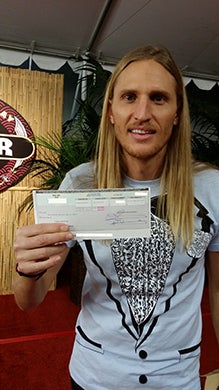 This is what a $1 million dollar check from CBS looks like: Apostol with his winnings after the show.

This season’s “Blood vs. Water” twist was the most significant departure from format in the show’s 13 year history. Ten alumni players returned each bringing a “loved one” to play against in a rival tribe.  Over the course of the season, the cast largely cannibalized the “loved ones” pairs, breaking up nearly all of the duos before the end game ,but adding new strategy to the game along the way.  The season taped in the Phillipines in May and June of this year, before the typhoon Haiyan disaster this fall.

Apostol brought his girlfiend Rachel Foulger on to the show this season. She was voted out of the game early in a plan to lure the eventual winner out of the game in a twist that would have allowed him to switch places with her. It didn’t work.

Coming off a disappointing single season of his syndicated “The Jeff Probst Show” talk show, Probst said in an interview  that he was uncomfortable and unaccustomed to the level of scrutiny and input in the talk genre, it’s not surprising that when he returned to the comfortable confines of Survivor on a remote island sixteen time zones away, he relied on his gut to shepherd major tweaks in the format.

Earlier this week, CBS renewed the show for two more seasons, guaranteeing it will reach a milestone 30th season in the spring 2015.

With the renewal, Survivor is poised to edge the original reality franchise “The Real World” whose upcoming San Francisco season will be its 29th. Like Survivor, “Real World” producers  Bunim-Murray are also substantially tweaking the format by bringing in pre-existing relationships. Five “exes” of the cast members will join the house after the season starts.

The four most recent regular airings of the show have averaged a 2.45 in the key 18-49 demographic and 9.48 million viewers, off 16% from last fall’s “Survivor Phillipines.” In its 13th year on air and its 27th season, it remains the #2 reality series in 18-49 on broadcast.

The next season, teased during the show as “Brains vs. Braun vs. Beauty” begins in February.