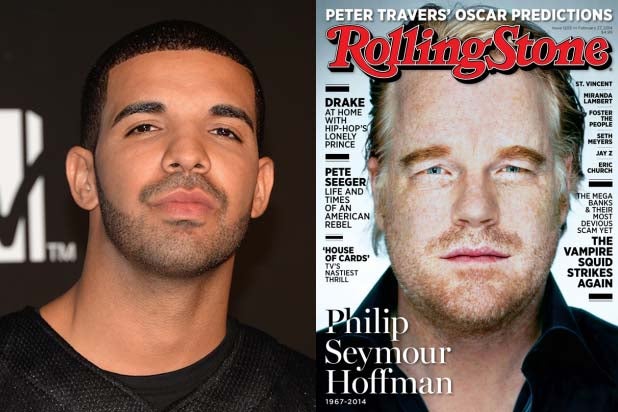 Rolling Stone magazine decided to put recently deceased actor Philip Seymour Hoffman on the cover this month, and Drake is “disgusted with that,” because he says it was his face that was supposed to be immortalized on the new issue.

The rapper is also upset for allegedly being misquoted about Kanye West in his interview for the magazine, and took to Twitter on Thursday to vent his frustrations.

I never commented on Yeezus for my interview portion of Rolling Stone. They also took my cover from me last minute and ran the issue.

I’m disgusted with that. RIP to Phillip Seymour Hoffman. All respect due. But the press is evil.

I’m done doing interviews for magazines. I just want to give my music to the people. That’s the only way my message gets across accurately.

Rolling Stone has not yet responded to TheWrap‘s request for comment.

Instead of highlighting the interview with “Hip-Hop’s lonely prince,” the publication decided to dedicate the new issue to Hoffman’s life through interviews with the Oscar winner’s closest friends and colleagues. While a few excerpts from the story are currently available, the magazine goes on sale on Friday.