Syndicated daytime series “The Drew Barrymore Show” has been renewed through the 2022-2023 season, Steve LoCascio, president of CBS Media Ventures announced on Friday — with a major format change. Next season, each installment of the show will be split into two half-hour episodes that can air back-to-back or separately.

Wendy McMahon, president and co-head of CBS News and Stations said in a statement that CBS Stations can either launch new local newscasts from 9:00-9:30 a.m. that will serve as lead-ins to the first half-hour of the talk show, or air both half-hour episodes on its duopoly stations in markets where the company owns two stations.

“Stations have always had a finite amount of shelf space, so we’re evolving the syndication model to meet the needs of our partners,” LoCascio said. “We could not be happier to continue our relationship with CBS Stations and our other station partners to deliver more of ‘The Drew Barrymore Show’ through this innovative new idea. From Drew’s unique take on everyday news to headline-generating celebrity interviews to lifestyle how-tos, Drew is a force of nature who has brought a fresh optimistic viewpoint to daytime television. We love having her as part of the CBS family.” 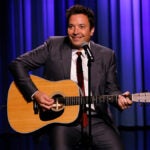 “We love the idea of creating a seamless flow of exquisite storytelling from the final hour of ‘CBS Mornings’ to a new half-hour of local news on our CBS Stations as we lead into the distinctive approach to the topics of the day and breath of fresh air that Drew Barrymore provides,” McMahon said in a statement. “We very much appreciate our CBS Media Ventures colleagues’ willingness to help us reimagine how we schedule programming on our stations. This collaboration allows us to embrace the opportunity for the growing demand for local news in the communities we serve while also continuing to support a show that is delivering its strongest quarterly performance to date on our stations and is a cherished programming asset for our company.”

“I am honored and grateful but I also want to take this show higher and continue to innovate and be a game changer in the daytime space,” Barrymore said in a statement. “Rising to the occasion of finding people in the diverse way they watch is what I want to challenge myself with. Our show wants to be a bright spot not a blind spot and we just want to make people feel good. And I thank all the people who helped us get here.”