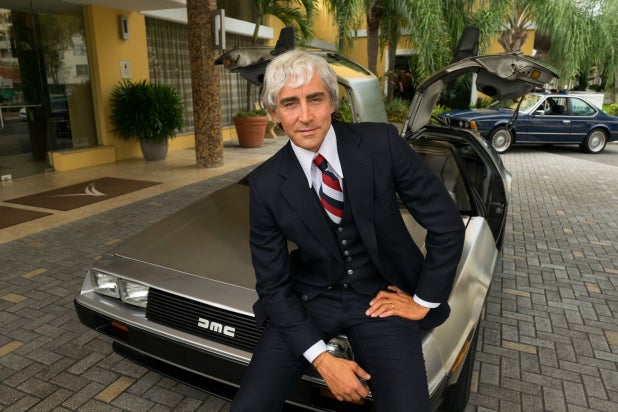 So perhaps the problem is that there’s too much material here? “Driven” is the second film this summer to address DeLorean’s life, and the second one to feel overwhelmed by its subject. In the more ambitious “Framing John DeLorean,” documentarians Sheena Joyce and Don Argott addressed their subject head-on, mixing various styles and genres in an attempt to understand him.

Here, director Nick Hamm (“The Journey”) and writer Colin Bateman skirt the edges of his experience, as if they’re too intimidated to approach it directly. So we get a relatively amusing dramedy, but one in which DeLorean remains a sidelined player in his own story.

Our protagonist is not the vehicular visionary, but rather his shifty neighbor Jim Hoffman (Jason Sudeikis). Hoffman is the kind of guy who pays for his family’s trip to Disney World by making a quick stop in Bolivia to smuggle several kilos of cocaine. His aw-shucks demeanor suggests he means well, but how many times is his wife (Judy Greer) supposed to look the other way? Sure, she wants fancy marble bathrooms, but she really doesn’t want to know how Jim earns the money to pay for them.

Unfortunately for them both, the FBI is extremely interested in where Jim gets his money. And when he makes one mistake too many, he’s given an offer he can’t legally refuse: a job as a government informant. Agent Tisa (Corey Stoll) keeps him busy tracking a sleazy drug dealer (Michael Cudlitz) and his flaky girlfriend (Erin Moriarty, providing a master class in making the most of very little).

But Jim’s bored and can’t help looking for new trouble. He finds plenty of it when his family moves next door to the DeLoreans. For a while, he’s happy hanging out at their fancy parties,and housesitting when they’re away. But John (Lee Pace) has noticed that Jim is connected to big money in some shady way, and when he needs millions of dollars — fast — he suggests they make a deal. It’s no spoiler to remind viewers where things wound up: Hamm and Bateman begin and end the film in a courtroom, using flashbacks to fill in the rest.

Jim is our way in and out of this stranger-than-fiction tale, so it’s lucky that Sudeikis is so likable. He’s entertaining all the way through, which means it may be a while before you notice the generic nature of the movie around him. The period costumes and details, for example, are well chosen as fun flash. But anyone who’s recently been steeped in the loving authenticity of “Once Upon a Time…in Hollywood” may have less patience for contemporary films that rely on ostentatious props to signal a bygone era.

More egregious is the way DeLorean becomes one of those props. Pace has clearly studied the man intently, and he does a subtler impression than Alec Baldwin’s in “Framing John DeLorean.” He focuses, impressively, on how DeLorean balanced gentlemanly understatement with an icon’s overconfidence. But he’s also forced to compete with the noticeable work of the hair-and-makeup department. Pace’s careful performance loses some of its power when we’re distracted by John’s white wig and dramatic eyebrows, an ever-present reminder that these aren’t real people so much as Historic Characters.

Which brings us to one of the filmmakers’ strangest choices: they had a terrific character in DeLorean’s wife, Cristina Ferrare (played here by Isabel Arraiza, “Pearson”). One of the most high-profile women in America at the time, Ferrare was equally famous for being a supermodel, TV host, author, socialite, wife, and mother. And yet the script erases all but one of those roles, rewriting her as a superficial accessory for her rich husband.

The fact that Hamm prefers to favor a fictionalized imagining of Hoffman’s wife, about whom virtually nothing is known, is explicable only if we assume he wanted to give Greer more to do. (She handles her role with typical skill and humor, but it mostly involves one exasperated ultimatum after another.)

In a way, though, complaining about the lack of substance feels beside the point. Odd as it is to watch both DeLoreans treated as afterthoughts, “Driven” is a joyride more interested in the journey than in any significant destination.