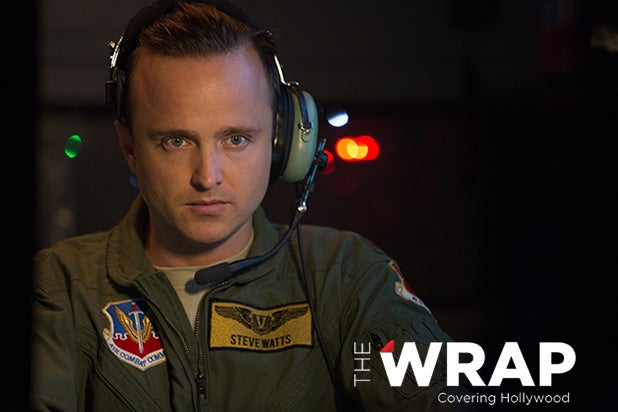 “Eye in the Sky” concerns a terrorist-targeting drone mission that becomes a flashpoint when a young civilian girl enters the kill zone. The film examines how government leaders now wage war in control rooms thousands of miles away from their targets, using military personnel stationed in Las Vegas shipping containers rather than on the ground like the old days.

The movie also begs the question of whether collateral damage is a necessary evil when stopping terrorists bent on suicide missions — and whether the potential political fallout is worth the risk.

While “Eye in the Sky” offers no shortage of fairly repetitive scenes in which bureaucrats pass the buck and “refer up” the chain of command, its strong cast keeps things interesting, and the entertaining film is more commercial than “Good Kill,” which focused on how these drone missions affect the pilot pulling the trigger. If there was ever a sequel to “Eye in the Sky” that followed Aaron Paul‘s drone pilot, it would probably look a lot like “Good Kill.”

Produced by Colin Firth, David Lancaster and Ged Doherty, “Eye in the Sky” was written by Guy Hibbert, who displays a knack for military speak, though the script indulges in far too much jargon. While Mirren and Rickman bring a certain gravitas to their roles, the film fares best during scenes featuring Abdi as a Somalian spy working for Kenyan Special Forces. The Oscar-nominated star of “Captain Phillips” doesn’t enjoy nearly as much screen time as his more established co-stars, but regardless steals the movie.

WME Global is handling domestic sales for “Eye in the Sky” and the film should fare better than “Good Kill,” which ended up selling to IFC Films one month after the conclusion of last year’s festival. eOne is handling international sales.