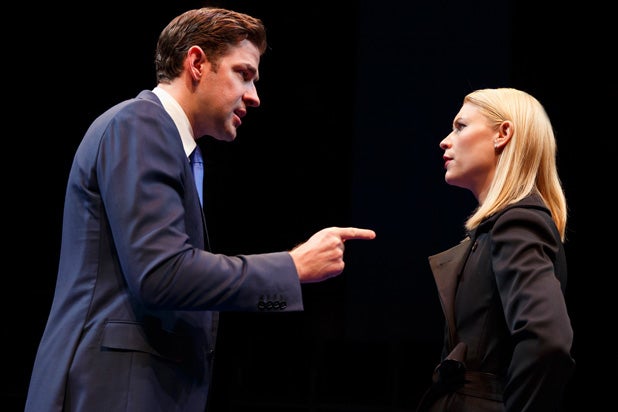 Why do plays about high finance always seem to be set in a 1990s disco? Is all that pulsating music and light meant to convey a heady mix of excitement, alienation, and rampant immorality?

In between the play’s many scene changes, Kail dials up the disco effects with Jason Lyons’ flashy light show and Lindsay Jones’ driving original music and sound design. Yes, the people who work at KMM Capital Management sure are vapid, but in a powerful and sexy kind of way. That they don’t have a DJ in their boardroom is an oversight sure to be corrected with that next big deal.

Burgess’ story isn’t as convoluted as “The Big Short” or even “Margin Call.” Rick (Hank Azaria) is top man at KMM, which has an image problem thanks to him. After making a deal that led to massive layoffs, Rick threw himself and his fiancée a big engagement party that received much bad press for the company.

His junior partner Seth (John Krasinski) wants to improve that image by purchasing a luggage company that employs hundreds of Americans. Another junior partner, Jenny (Claire Danes), couldn’t care less about image. She wants to take that luggage company, lay off all but a few Americans, and offshore it. Seth is basically the good guy, although he can’t be that good because, after all, he’s in finance. Jenny, on the other hand, is the villain. It would be sexist to call her the b-word. It’s more accurate simply to call her a total prick. 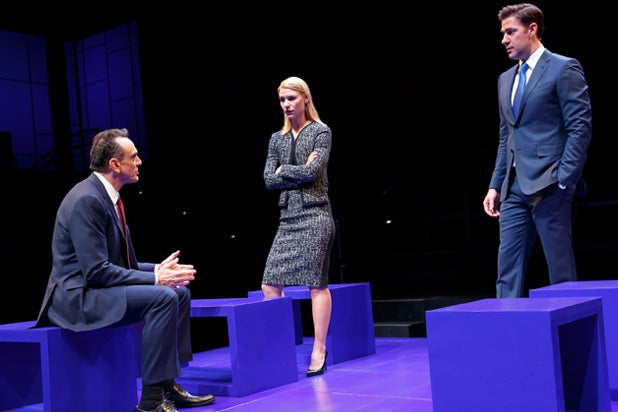 Jenny openly taunts Seth for his sexual orientation, even though he’s married (to a woman) and expecting a child. At one point, we’re supposed to see Jenny as uncaring toward her coworkers because she doesn’t know the home address of a KMM analyst. Watching this kind of behavior on stage, I had to wonder if the playwright has ever visited a contemporary Manhattan office. Worse, Jenny’s humor derives from skewering certain local sacred cows, ranging from the New York Times to NYU, but in the end these digs come off as crass appeals to the snobbery of a downtown theater audience.

In the movies, Tilda Swinton and Cate Blanchett have given nuance to this kind of ball-busting gorgon. Danes does not. She fidgets almost uncontrollably. She punctuates every other word with a gesture, a grimace, or a popping of the eyes.

Azaria and Krasinski are far more relaxed on stage, to the point that a peculiar subtext emerges. Are Burgess and Kail saying that men wear power naturally, while a woman like Jenny has to huff, puff, and flail to get her way?

Azaria isn’t required to do much except be gruff and play referee. Krasinski exudes such warmth and humor that Seth’s real motives remain cloaked in a wonderful ambivalence. His intentions can’t be pure, but he keeps us guessing.