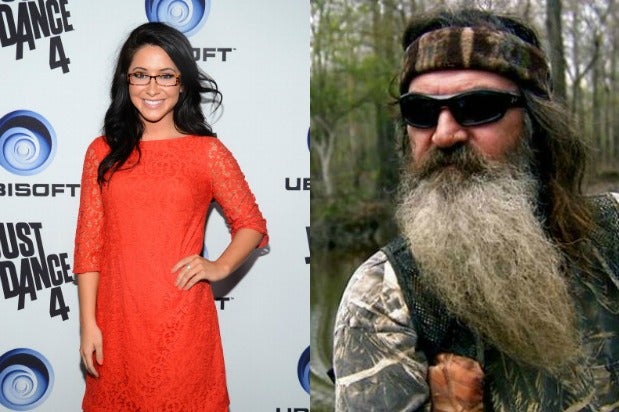 “I think it’s so hypocritical how the LGBT community expects every single flippen [sic]  person to agree with their life style,” she said in a blog post.

“I hate how the LGBT community says it’s all about ‘love’ and ‘equality,'” she continued. “However, if you don’t agree with their lifestyle, they spread the most hate. It is so hypocritical it makes my stomach turn. They need to learn how to respect others’ opinions and not just jump to the conclusion that everyone who doesn’t support homosexuality and gay marriage is homophobic.”

Bristol Palin is making essentially the same argument as her mother, Sarah Palin, who said on Facebook last week, “”Free speech is an endangered species. Those ‘intolerants’ hatin’ and taking on the ‘Duck Dynasty’ patriarch for voicing his personal opinion are taking on all of us.”

A&E suspended Robertson from “Duck Dynasty” last week after he made anti-gay comments in an interview with GQ.

Bristol Palin linked to a Time article by writer Brandon Ambrosino, who is gay. Ambrosino wondered: “Why is our go-to political strategy for beating our opponents to silence them?” He called for rising above “the endless sea of tweet-hate” to use Robertson’s comments as an opportunity to educate people.

The former “Dancing With the Stars” contestant has denied in the past that she is herself “a homophobic.”

“I like gays,” she said in July 2012. “I’m not a homophobic and I’m so sick of people saying that. Just because I’m for traditional marriage doesn’t really mean I’m scared or anything of anyone else, and I don’t hate anybody.”

In 2010, she made a gay joke during an online spat with fellow “Dancing” contestant Margeret Cho, saying if Cho understood her family’s views, ” you would embrace us faster than KD Lang at an Indigo Girls concert.”

In November 2010, she apologized on behalf of herself and her then-16-year-old sister, Willow, after Willow used homophobic slurs in a Facebook feud between the sisters and people making fun of their family.