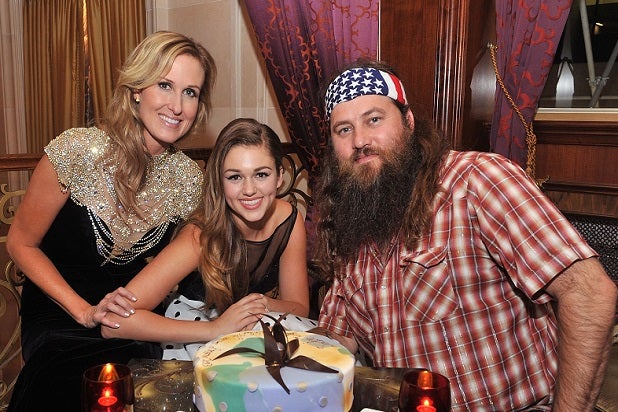 Is “Duck Dynasty” just a big advertisement for the Almighty? At least one of the stars seems to think so.

Sadie Robertson, the teenage daughter of Duck Commander boss Willie Robertson, tells Fox411 that her clan decided to do the A&E reality series in order to spread the word of the lord.

“When we began ‘Duck Dynasty,’ we weren’t starting it for fame,” Robertson said. “We started it to get the message of God out there.”

The 16-year-old also lamented the lack of old-time religion on the small screen lately.

“We could have easily done a reality show like everyone else,” Robertson noted. “But it’s our faith that catches people’s eyes because sadly, it’s not something we’re used to seeing [on TV] these days.”

The series has made no secret of the Louisiana-based Robertson family’s faith; episodes typically end with the clan saying grace. However, family patriarch Phil Robertson has complained that the show has edited the name Jesus out of the family’s prayer scenes.

“The other thing was when we prayed, we said, ‘In Jesus’ name, amen’ … they would just have me say, ‘And thank you, Lord, for the food, thank you for loving us, amen.'” Robertson told Sports Spectrum late last year. “So I said, ‘why would you cut out in Jesus’ name?'”

Last year, the elder Robertson found himself when he expressed anti-gay views during a GQ interview, lumping homosexuals in with drunks and terrorists and declaring, “They won’t inherit the kingdom of God.” Robertson was suspended from the show over the comments, but was quickly reinstated.