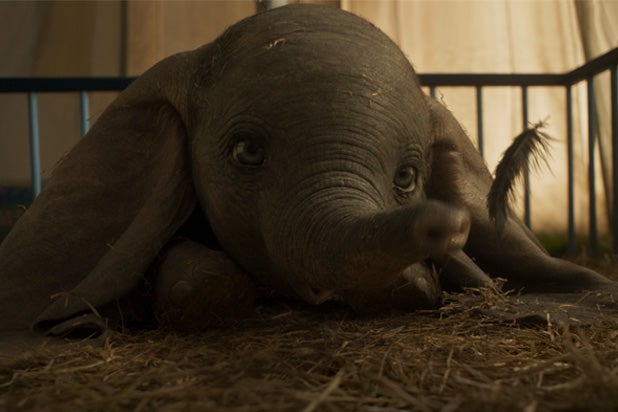 Disney’s live-action remake of its animated classic “Dumbo” spread its ears and soared to $2.6 million in its Thursday previews. It opens wide this weekend.

Tim Burton directs the children’s film about the flying baby elephant, and trackers have the film projected to earn between $40-50 million in its opening weekend, with Disney projecting around the $50 million mark.

The figure would be lower than other recent live-action remakes from Disney. “Cinderella” made $2.3 million in its Thursday previews and grossed $67.8 million in its opening weekend in March 2015. Jon Favreau’s “The Jungle Book” earned an even higher $4.2 million ahead of a $103 million opening weekend. For some more recent examples, “Dumbo” is in the range of the third “How to Train Your Dragon” film, which made $3 million ahead of a $55 million opening weekend, and “The Lego Movie 2,” which did $2.1 million on Thursday before opening to $34 million.

“Dumbo” is loosely based on the original film from 1941 and follows a former circus star (Colin Farrell) and his two children (Nico Parker and Finley Hobbins), who are tasked by struggling circus owner Max Medici (Danny DeVito) to take care of a baby elephant with giant ears. But when the laughingstock elephant turns out to be able to fly, the ensuing resurgence in the circus’ popularity draws the attention of a shady businessman (Michael Keaton) who wants Dumbo to be the centerpiece of his new amusement park.

“Dumbo” also stars Eva Green and Alan Arkin, and is directed by Burton from a script by Ehren Kruger. It currently has a 55 percent score on Rotten Tomatoes.

“Dumbo” opens opposite “The Beach Bum” and “Unplanned,” which are on just over 1,000 screens this weekend, and “Hotel Mumbai,” which goes wider this weekend.