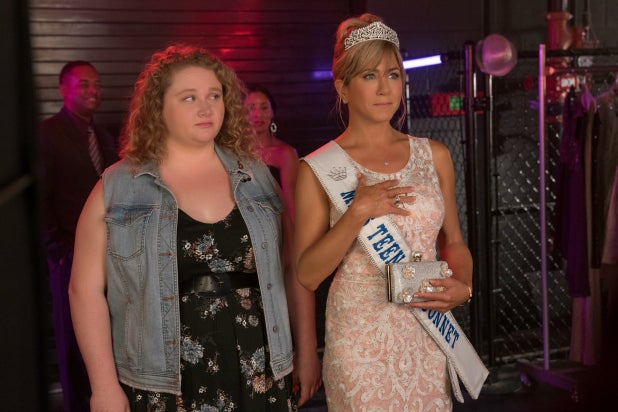 If your guilty pleasures expand to include Hallmark-style sentimentality this time of year, you might consider adding “Dumplin'” to your viewing lineup. It has nothing to do with the holiday season, but it’s wrapped as neatly as any gift you might find under a Christmas tree.

Though directed by rom-com vet Anne Fletcher (“27 Dresses,” “The Proposal”) and written by producer Kristin Hahn (“The Departed”), this modest dramedy — which is being released simultaneously in theaters and on Netflix — is a far better fit for the small screen. But a big heart and strong cast go a long way towards elevating its prosaic approach.

Most of the credit goes to the two leads, Jennifer Aniston and Danielle Macdonald, who play a markedly mismatched mother and daughter. Aniston’s strenuously meticulous Rosie was, as she’ll happily remind anyone who asks, 1991’s Miss Teen Blue Bonnet. This might not seem like much to us, but in her corner of Texas, it matters. Decades after her win, in fact, Rosie is still a legend.

Her teen daughter Willowdean (Macdonald, “Patti Cake$”), better known as Will, is a great kid: funny, smart, outspoken. But she’s also overweight, especially by pageant standards, and has little interest in being officially judged. She and her mother don’t seem to have anything in common, and the distance only broadens when Will and her similarly non-conformist friends (played by Odeya Rush, Bex Taylor-Klaus and Maddie Baillio) impetuously try out for the upcoming Blue Bonnet pageant.

Rosie is initially appalled by this rebellion and assumes the girls are making a mockery of an event she still proudly chairs. But Will’s intentions are pure: She wants to modernize the competition that still has such a tight grip on her town. She also wants to pay homage to her recently-deceased aunt, who was overshadowed by Rosie and never got to enter the pageant. And though she’s loath to admit it, she really wants to connect with her mother, who treats Will — whom she calls Dumplin’ — like a slightly embarrassing houseguest she only vaguely knows.

It’s easy to understand why Julie Murphy’s YA novel of the same name is so beloved; Will is both self-conscious and heroic, and her fight against The System — as represented by parents, cooler kids, and stifling beauty standards — is utterly relatable.

But, of course, adolescents in other, more trenchant films are currently dealing with police brutality (“The Hate U Give”), drug addiction (“Ben is Back”), and forced conversion (“Boy Erased”). In contrast, this movie often feels like it was made back when Rosie first donned her crown, what with its wide-eyed wonder over sassy drag queens (led by Harold Perrineau), superficial takes on Will’s very real challenges and broadly-drawn characters with names like Millicent Amethyst Michelchuk. Moreover, is it really such a victory that Will’s metal-loving feminist pal is finally allowed to strut across the stage in a bathing suit, even if she does refuse to pair it with heels?

But this is a generous movie, and an unrepentant fantasy at that, so it’s hard not to meet it with openheartedness. For one thing, Will’s idol is Dolly Parton, and the soundtrack, to which Parton contributed several new and re-recorded tracks, is a delight. (Who could disagree when ever-overlooked Will notes the eternally wrenching beauty of Parton’s “Jolene”?)

It’s also nice to see Aniston, who sometimes struggles to find the right material, so ideally suited to a project. She leans into Rosie’s obsession, but steadfastly resists the easy urge towards caricature or judgment. Instead, she portrays a woman whose hardships have been kept at bay by a strict set of rules. Rosie wasn’t able to control her lack of education or the difficulties of being a financially insecure single parent. But for her, there’s both comfort and pride to be found in putting yourself together well, especially when life threatens to fall apart.

Just as her mother has used beauty to buffer a cold world, Will seems bound by her body to feel forever out of place. Macdonald, who brilliantly tackled another version of this theme in last year’s “Patti Cake$,” takes even the more superficial scenes seriously. (She also aces the accent, despite being Australian.) As a result, the movie itself gains some crucial depth.

Granted, it’s a little frustrating to watch someone with Macdonald’s innate talent and star quality confined by the limits of a predictable script and unimaginative direction. But think of this as an early round: the sooner you discover this gifted actress, the more bragging rights you’ll have when Hollywood finally bestows upon her the sorts of trophies she deserves.