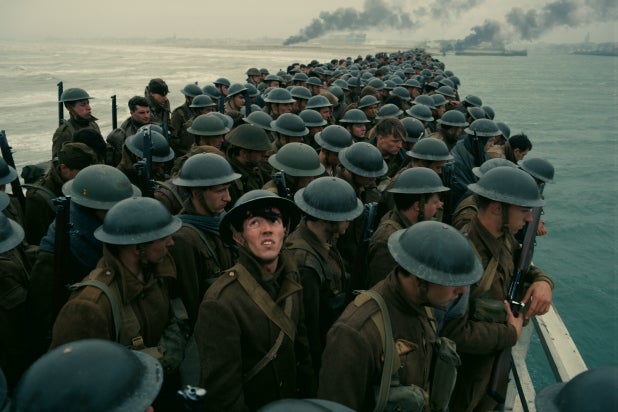 Christopher Nolan makes pop movies that aspire to be art — and vice versa — and he has perhaps never served his twin goals as successfully as he does in “Dunkirk.” In telling the story of the rescue of hundreds of thousands of blockaded Allied forces in the early days of World War II, Nolan has crafted a film that’s sensational in every sense of the word; it aims for both the heart and the head, to be sure, but arrives there via the central nervous system.

“Dunkirk” is gripping from its very opening moments, in which we see soldiers getting picked off by invisible snipers in the middle of the titular town as propaganda flyers shower from overhead, announcing to the British, French, Canadian, Belgian and Dutch troops that they are hopelessly penned in by the Germans.

It’s not until the end that we can truly appreciate the feat that writer-director Nolan has accomplished here: this massive endeavor is captured through the eyes of a few of its participants; character is expressed more through action (or inaction) than through dialogue; and civilians and enlisted men alike show themselves capable of heroism or cowardice and compassion or self-interest.

So many films are made in a way that suggests that one must choose between adrenaline and depth, or that audiences can only understand people and events through pages of talk-talk-talk, but Nolan quite cannily weds a studio sensibility (relentless action! staggering visual effects!) with the kind of subtlety and dramatic implication we rarely see in a film that doesn’t involve subtitles.

It’s May of 1940, and the Germans have made their way through the Netherlands and Belgium with an eye to the English Channel. For the fighting men trapped at Dunkirk, the White Cliffs of Dover are tantalizingly close yet cruelly unattainable. “Dunkirk” tells its story on three parallel tracks. The sole survivor of that opening sequence is Tommy (Fionn Whitehead), who will do anything to cut the long lines to get on a transport ship out, even if it means tossing a wounded soldier on a stretcher and carrying him with the help of an equally desperate comrade (Damien Bonnard, “Staying Vertical”).

Making their way to Dunkirk by air are pilots Farrier (Tom Hardy) and Collins (Jack Lowden, “War & Peace”) who must fend off enemy aircraft while defending Allied ships from German vessels trying to sink them. (And then there’s the issue of whether or not they’ll have enough fuel to return, made all the more complicated when an enemy bullet takes out Farrier’s gas gauge.)

To effect a rescue, the British Royal Navy commandeers a number of civilian vessels; one of them is a pleasure-craft steered by Mr. Dawson (Mark Rylance) with the help of teenagers George (Barry Keoghan, “’71”) and Peter (Tom Glynn-Carney), who are both thrilled and terrified to be getting so close to the fighting.

The magnitude of the undertaking is portrayed through the difficulties that pop up in each storyline: Tommy and an ever-growing band of would-be escapees (including Alex, played by Harry Styles in a confident screen debut) find themselves going from one frying pan to another fire, as each ship that seems like it might save them becomes the target of the enemy. Being above the fray puts the pilots in no less danger than their earthbound counterparts, and the civilians must cope with rough seas, the proximity of bullets and torpedoes, and the PTSD-afflicted solider (Cillian Murphy), who is none too pleased to hear that this boat is heading toward Dunkirk and not away from it.

Nolan and cinematographer Hoyte van Hoytema (“Interstellar”) shot the film using 65mm and IMAX cameras, and while the big scenes of spectacle are unquestionably sweeping and impressive, it’s the smaller moments that stayed with me more, whether it’s those cascading leaflets in the opening scene, the terrifying majesty of a fighter plane gliding with its engines off, or a harrowing sequence involving a downed plane that will doubtless be used by English teachers to illustrate what poet Stevie Smith meant when she wrote “Not Waving but Drowning.”

The editing by Lee Smith (“Inception”) is wonderfully relentless, even in a few moments when some of Nolan’s tricks with time don’t quite pan out as well as he might have liked; by keeping the viewer breathless and jumpy, the film’s cutting illustrates that sense of ever-present horror and danger. It’s aided greatly by a Hans Zimmer score that knows when to pound us with percussion and when to let the strings go soaring. (There’s a moment toward the end of the film that’s so gloriously old-fashioned and sweeping that it calls to mind the propaganda-film-within-a-film in “Their Finest,” another great tale that touches on the Dunkirk rescue.)

Also Read: Christopher Nolan Had No Idea How Famous Harry Styles Was When He Cast Him in 'Dunkirk'

Nolan’s cast is exceptional, finding ways to engage and build character in a film that doesn’t provide them the traditional means to do so. (Dialogue-wise, this is like a Terrence Malick movie without the explanatory whispered monologues.) Whitehead and Bonnard (and Styles, for that matter) have the kind of striking faces that, with the help of Van Hoytema’s lens, allows them to stand out in a crowd of soldiers all sporting the same uniform and haircut, and their eyes communicate volumes as they face certain death over and over again.

Keoghan and Lowden express a great deal of soul behind their “Keep Calm and Carry On” exteriors and, of course, old pros Hardy, Murphy and Rylance know exactly how to serve the story and express terror and uncertainty without ever giving overblown star turns.

As it unfolds, “Dunkirk” provides one thrill after another, but it’s only in the aggregate that its power as a document of will and heroism becomes clear. It’s both a triumph for Nolan and a new bar toward which future action-based dramas should aspire.