For years now, there’s been rumbling that the DVD market – the studios’ most reliable and robust cash cow – has been flattening, with Hollywood treating the news like a 4.1 level earthquake in Corona.

But in recent weeks, it’s become clear that this is no tremor — more like a 6.6 level seism running right down Hollywood Boulevard.

As home libraries have reached saturation levels and audiences have sought new forms of entertainment (as in, videogames and the Internet), consumer spending on home video entertainment has been on a downward spiral, dropping to $22.4 billion in 2008 from a peak of $24.9 in 2004, according to the Digital Entertainment Group.

Even new blockbuster releases are not making a ka-ching sound when they move to DVD.

And the introduction of high-definition DVDs is not proving to be the saving grace that studios had prayed for. 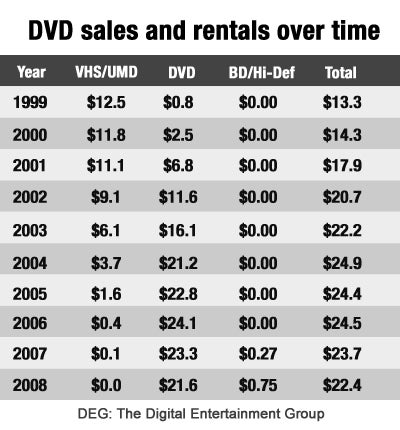 The end of the DVD gravy train isn’t just bad for shareholders and studio heads. Creative Hollywood will feel it too. It will affect negotiations with the Screen Actors Guild, given that studios can plainly argue that, without the ballast of DVD income, they need a bigger piece of the Internet pie.

All of this has been in the ether in recent years, but now there are actual numbers, and they’re not pretty.

At Time Warner, although operating profit at the film division was up 6%, sales of DVD titles were down a staggering 24%, even though Warner Bros.’ “The Dark Knight” was the top-selling DVD of 2008.

Disney’s operating income for its film studio plummeted 64%, with DVD sales sliding a drastic 33%, a drop that not even “Wall-E,” one of the top-selling DVDs of 2008, could buffer.

Quarterly results for Sony, GE and Lionsgate were also bleak.

Almost unanimously, studios have blamed the recession for their dismal report cards. Viacom CEO Philippe Dauman said that the “sharp downturn … is attributed to the economy,” and that, “I don’t think there’s enough data in this environment to analyze what the secular trends may be.”

All across Hollywood, the message from the studios has been: It’s the economy, stupid.

But others beg to differ.

“I think it’s one part recession, but there are bigger factors,” said producer Bill Mechanic, the former head of Fox Filmed Entertainment, who oversaw Disney’s homevideo division in the 1980s.

Mechanic says that one of those is that the introduction of hi-definition discs has created a pricing conundrum.

Assuming that consumers will replace their traditional DVD collection with hi-definition discs, studios are dumping the prices of regular DVDs.

“That’s a misreading of consumer behavior as well as a misreading of the economic environment,” Mechanic says. “It’s devalued the libraries. If you can buy ‘Titanic’ for $4.99” versus $19.99 for a new, but lesser, movie on Blu-ray, consumers will say, “‘Well, wait a minute…’

“There’s no rhyme or reason of what I see in the market place in terms of pricing.”

But perhaps the scariest question surrounding Blu-ray is – do people care enough to upgrade to hi-def?

In 2008, spending on Blu-ray shot up 250% from the previous year, but the format still represents just a fraction of home entertainment spending, which remains dominated by traditional DVDs.

Media analyst Hal Vogel is also hesitant to place too much emphasis on the economy.

“Obviously, there is some impact from the recession, but I don’t think that’s the major event here.

Vogel cites piracy, digital downloading, as well as the saturation of home libraries as the major reasons for the sharp downturn in DVD numbers.

Speculation aside, the facts do not look good. Last year, the biggest theatrical blockbusters were lukewarm when they moved to DVD release.

Paramount’s “Indiana Jones and the Kingdom of the Crystal Skull,” which grossed $317 million at the U.S. box office, sold less than 6 million DVD units its first week of release – or, 30% fewer DVDs than “Transformers” sold a year earlier.

Studios keep total DVD sales numbers under lock and key – long gone are the days when Disney crowed that “The Lion King” sold more than 30 million units worldwide, a number that today is hallucinatory. But for some comparison, “The Dark Knight” sold 13.5 million units its first week.

Other blockbusters that disappointed in DVD were Sony’s “You Don’t Mess With the Zohan,” which sold fewer than a million units its first week; Fox’s “Horton Hears a Who!” (fewer than 2 million); and Universal’s “The Incredible Hulk” (3 million).

In response to the faltering market, studios are cutting back in overhead and production, and adding bells-and-whistles features to DVDs [such as digital download options], but mostly no one knows what to do.

Says Vogel: “I don’t know what the new areas of growth are” that will pick up the slack for DVDs. “If I knew, I wouldn’t tell you anyway. That’d be very valuable information to have.”