The film, written and directed by Rawson Marshall Thurber, also stars Ryan Reynolds and Gal Gadot. It was produced by Beau Flynn for FlynnPictureCo, Johnson, Dany Garcia, and Hiram Garcia for Seven Bucks Productions, and Thurber.

“Red Notice” centers around the pursuit of the most wanted art thief in the world in which an Interpol-issued Red Notice is issued as a global alert to hunt and capture the world’s most wanted. But when a daring heist brings together the FBI’s top profiler (Johnson) and two rival criminals (Gadot, Reynolds), there’s no telling what will happen. 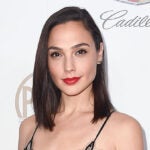 Johnson calls it “Netflix’s biggest movie ever,” and it certainly doesn’t get bigger than him. He shared the release date along with the three of them all in formal wear inside a room filled with weaponry in glass cases.

Thurber previously directed Johnson in both “Central Intelligence” and “Skyscraper,” but he’s also known for directing “Dodgeball” and “We’re the Millers.”

“Red Notice” was originally supposed to be a theatrical release for Universal, but the coronavirus pandemic pushed back the production and the film’s release date, and the film wound up on Netflix, with Johnson and Gadot each expected to get massive paydays with reports suggesting it will be upwards of $20 million since the film is now going to streaming rather than theatrical.