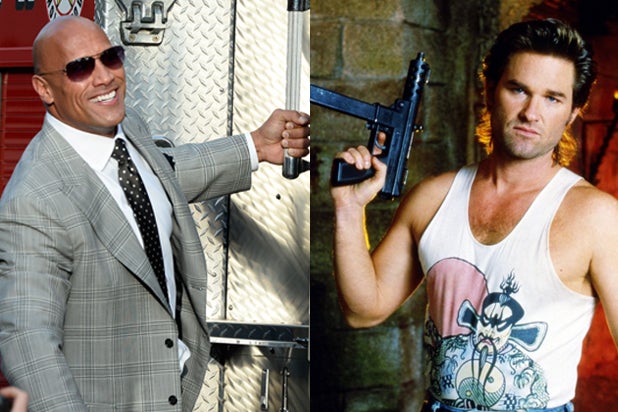 Dwayne Johnson is in negotiations to star in and produce a remake of John Carpenter‘s cult classic “Big Trouble in Little China” that will be written by “X-Men: First Class” scribes Ashley Miller and Zack Stentz, multiple individuals familiar with the project have told TheWrap.

A representative for 20th Century Fox did not immediately respond to a request for comment.

Johnson is making a deal to play Jack Burton, an all-American trucker who gets dragged into a centuries-old mystical battle in San Francisco’s Chinatown.

Johnson and his producing partners at Seven Bucks Productions, Dany Garcia and Hiram Garcia, pitched the remake to rights-owner Fox, which released the original film. “Big Trouble in Little China” is one of Johnson’s favorite movies, and Miller and Stentz have already closed a deal to write the script.

The original 1986 starring Kurt Russell and Kim Cattrall only grossed $11 million at the domestic box office, but it is revered as a cult classic and a cable TV staple that fans can’t resist watching from when it airs.

Johnson is coming off an earth-shaking $54 million domestic opening weekend for “San Andreas,” which was also set in San Francisco. The film topped both the domestic and international box office and cemented Johnson’s place as America’s premiere action star.

Johnson will soon be seen on HBO’s new original series “Ballers,” which debuts later this month, and is also set to star in Warner Bros.’ comic book movie “Shazam.” Johnson is also lending his voice to Disney’s animated movie “Moana.” He’s represented by WME and Gang, Tyre, Ramer and Brown.