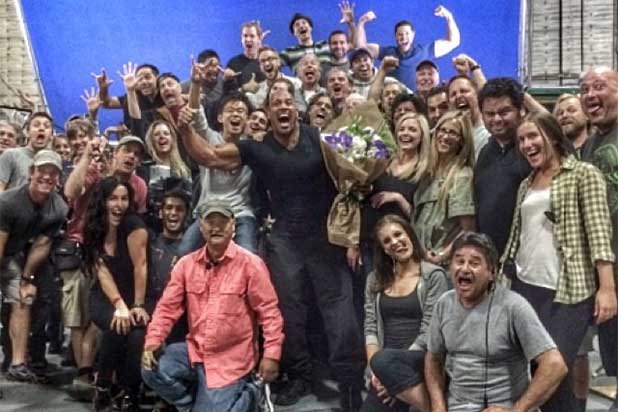 The 42-year-old action star and former professional wrestler posted a picture of the cast and crew to his Instagram page Tuesday, along with a heartfelt message about working on the film.

“My last day of [‘Fast & Furious 7.’] I’m truly touched by the farewell love my film crew has shown me. Its been an honor to work with such an incredibly hard working and brilliant crew,” he said in the photo caption. “They may not be household names, but they’ll ALWAYS be stars in my book. With great love and respect to all of you… see ya down the yellow brick road. Another place. Another time.#ThankUForAllYourWork”

Johnson, who plays federal agent Luke Hobbs, co-stared in “Fast Five” and “Fast & Furious 6” with Walker. As TheWrap previously reported , Walker — who had starred in all of the “Fast” films except “Tokyo Drift” — was a passenger in his friend Roger Rodas’ Porsche on Nov. 30, 2013, when it crashed into a concrete light pole, burst into flames and killed both of them.

Universal Pictures and director James Wan were suddenly without a star and production was immediately suspended. Shooting did not resume for another four months.

When cameras did start rolling again, Walker’s brothers Caleb and Cody Walker ended up standing in for their deceased brother on some shots.