Cheryl Burke will be skipping the next two episodes of ABC’s “Dancing With the Stars” after receiving a positive result on a COVID-19 test Sunday.

“Have some difficult news to share…” the “DWTS” pro, who is partnered with Peloton star Cody Rigsby this season, captioned a video posted to Instagram on Monday.

Burke’s video starts at 7 a.m. on Sunday on her way to get a COVID test. “I feel really sad, because I don’t want to let Cody down, and our freakin’ salsa was so good.” 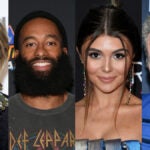 A source close to production told TheWrap that while Burke will be quarantining for the full 10 days per CDC guidelines and will not be entering the ballroom at that time physically, we may see her pop up virtually.

A new two-hour live episode of “DWTS” Season 30 — which is the second week of the new season — airs tonight, Monday, and will include the first eliminations of the season. When viewers tune in, they will find out how the show will be handling Burke’s absence and how it will affect her celebrity partner, Rigsby. The two were set to be dancing the salsa to “Don’t Go Yet” by Camila Cabello during tonight’s show.

Watch Burke share the news of her positive COVID-19 test in the video below.