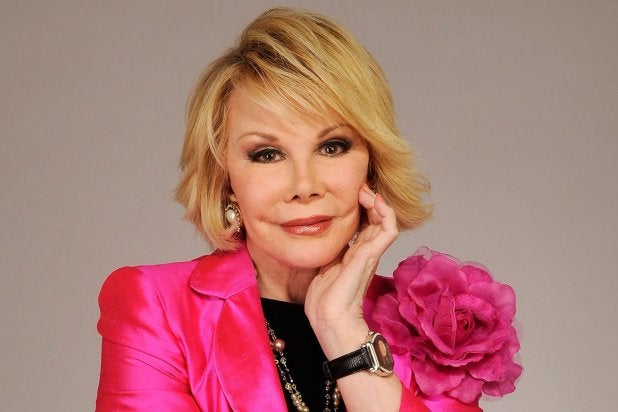 Rivers’ daughter Melissa Rivers kicked off the show with a heartfelt message before handing the baton to Joan’s “Fashion Police” co-hosts Giuliana Rancic, Kelly Osbourne and George Kotsiopoulos, though she tempered expectations that the irreverent and raunchy talk/comedy show would get bogged down in sentimentalism remembering their late colleague. “For the next 90 minutes, we’re going to do what my mom loved to do most – laugh,” she said at the show’s onset.

The 90 minute “Fashion Police” special included montages of, among other things, her love of talking about female private parts, “Jersey Shore” star Pauly D, and favorite fashion victim targets to really go after. The list is perhaps not surprising: the Kardashians, Lady Gaga, Courtney Love, Jennifer Lopez and Rihanna.

There were solemn moments too, particularly when Rancic recalled when she found out she had been diagnosed with breast cancer. She remembers Rivers telling her she’d be just fine and in good hands with her doctors. “And she was right,” Rancic said.

Rivers’ daughter joined the co-hosts at the end of the show for one last moment of remembrance. “I have so many memories with my mom on this set,” Rivers reminisced.

“But honestly, nothing made me smile more than when she would crack herself up, before she even got to the punchline of the joke.”

The co-hosts also marveled at the far-reaching affect Rivers had. “She affected so many people,” Melissa said.

“People you wouldn’t expect. I received a letter from the White House, from President Obama, someone who was often a target of her jokes, as was Mrs. Obama. I received a handwritten note, saying ‘Not only did she make us laugh, she made us think.'”

The show concluded with Rivers confirming that “Fashion Police” will continue without her mother, though there will be a break until new episodes resume in January.

E! has set the panel show’s return for Monday, Jan. 12 to coincide with the Golden Globe Awards.