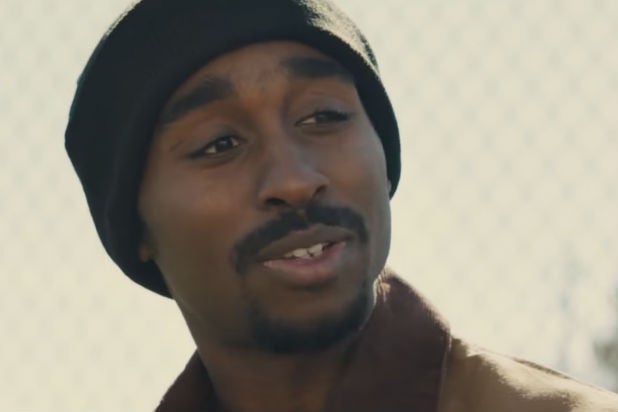 An early version of the Tupac Shakur biopic “All Eyez On Me” included a scene of prison inmates raping the late rapper — an attack that Shakur denied ever occurred.

John Singleton, who was attached as a writer and director on the film before the directing gig went to Benny Boom, wrote a harrowing scene set in a correctional facility — in which several guards allow a group of inmates to assault Shakur.

“The guards usher in one by one about six inmates. Their faces predatory and degenerate. These are the worst prisoners in this facility. One them [sic] licks his lips eyeing ‘Pac,” read script excerpts published by TMZ.

“The guards back away from the door then lock the library. As they walk away we see the six men rush toward Tupac and him fighting them off from the glass in the doorway, the camera pulls away and down the hallway as we hear the horror sounds of the prison,” the script continues.

TheWrap has confirmed it was indeed written by Singleton, with production company Morgan Creek adding that the scene was “one of several versions penned by Mr Singleton while he was working with [us].”

Reps for Singleton declined to comment on the matter. His new FX series “Snowfall,” about the proliferation of crack-cocaine, will premiere July 5.

Before his death in September 1996, Shakur denied he was ever raped in prison. He vented to the Los Angeles Times in 1995 about “watching the media report all kinds of lies about me, like that I got raped in jail. That never happened.”

That denial didn’t keep Mobb Deep (which lost member Prodigy last week) from referencing Shakur being raped in the 1996 diss track “Drop a Gem On ‘Em.” (Read more about their feud here.)

Also Read: 3 Reasons 'All Eyez on Me' Beat Bad Reviews

“All Eyez on Me” has earned over $38 million at the domestic box office, on a reported $40 million budget, despite negative reviews.

Singleton was not the only creative shakeup the project saw. Esteemed TV director Carl Franklin stepped in after Singleton dropped out over creative differences, though he ultimately passed as well. Boom came on board in late 2015.

The final film makes no mention of any assault, though the project did bump up against claims of historical inaccuracies. Actress and Shakur pal Jada Pinkett Smith took issue with specific scenes in the movie that she said didn’t happen in real life.

“The re-imagining of my relationship to Pac has been deeply hurtful,” Pinkett said in early June. While filmmakers expressed respect for the star, they maintain the events depicted in the movie are all based in truth.