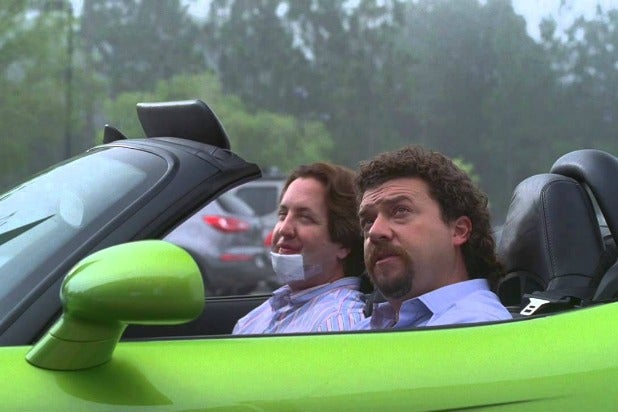 (Spoiler warning: Don’t read this if you still plan on watching the stunning finale of “Eastbound & Down”)

“Eastbound & Down” ended about as well as a comedy can, taking the “Six Feet Under” approach to ludicrous extremes and wrapping up Kenny Powers deranged odyssey without selling him out.

We got to see Sacha Baron Cohen as a disgusting network head, Lindsay Lohan as Kenny’s grown-up daughter, and Powers (Danny McBride) burning on an African funeral pyre. He kind of accepted that family is more important than fame. But not really.

He delivered Cohen the show’s best punch, giving up his TV dreams — but only so he could get to work in movies. He moved West with his family for a simpler life, but it was still all about Kenny: He loved his adorable wife, sure, but also daydreamed about her being murdered.

His screen treatment of his imagined future included poor April (Katy Mixon) getting shot in an alley. That left a stoic, hoverbike-bound Kenny free to travel to Africa, where he found a beautiful new wife (of course the most beautiful young woman in the village would marry the graying, husky American — why not?). He had children and spread the Powers name to the motherland, then died, gripping his walking stick.

It was shake-your-head, yell-no-at-the-screen ridiculous, in the best possible way. The show mashed together at least three classic TV endings, finding the grotesqueness in each of them: The flash forward, the “it-was-all-a-dream” reveal, and the hero as author, writing the last line of his story.

It all felt right. Of course some part of Kenny wishes April would die. He’s too much Kenny for one woman or one life. His settling down, really settling down, would have upended everything we’ve known about him for four seasons.

We’ll miss you on TV, Kenny. But you were always too big for it.