The soap scene in “12 Years a Slave” won Lupita Nyong’o an Oscar, and her achievement was no fluke. Anyone who thought Nyong’o might be a screen actress who needs close-ups, editing, and retakes to deliver a big performance is wrong.

She makes her New York stage debut in “The Walking Dead” star Danai Gurira‘s play “Eclipsed,” which opened Wednesday at the Public Theater, and proves herself a magnificent, fully formed stage actress. Indeed, she graduated with a master’s degree from the Yale School of Drama all of three years ago.

Playing a young woman caught in the Liberian civil war, Nyong’o gets to deliver two big soap-like scenes in “Eclipsed,” which had its world premiere in 2009 at the Woolly Mammoth Theatre in Washington, D.C. In one scene, she is a teenage girl turned soldier who harangues new recruits. The other is when she despairs at the realization that her job as a soldier is to procure young girls for the commanders’ pleasure.

Juliette Binoche recently essayed Antigone at the Brooklyn Academy of Music, and proved herself underwhelming in the role’s most dramatic moments. Just for the record: Nyong’o can play Antigone or any other tragic Greek heroine.

What’s equally impressive about her powerhouse portrayal in “Eclipsed” is how Nyong’o handles moments of extended silence and joy: the shades of discovery that cross her face when she haltingly reads from a biography of Bill Clinton, or how the glow in her eyes changes as wife Number One (Saycon Sengbloh) describes the book’s photos of Bill, Hillary, and Monica. Even Nyong’o’s seeming non-response to brutally losing her virginity makes a major statement.

These moments of understatement deliver, in part, because Sengbloh and Pascale Armand, playing wife Number Three, give the passionate verbal response that we expect from Nyong’o’s character. We never see their “husband,” the commander, and don’t need to. Gurira writes these women’s descriptions of abuse and entrapment in harrowing detail. 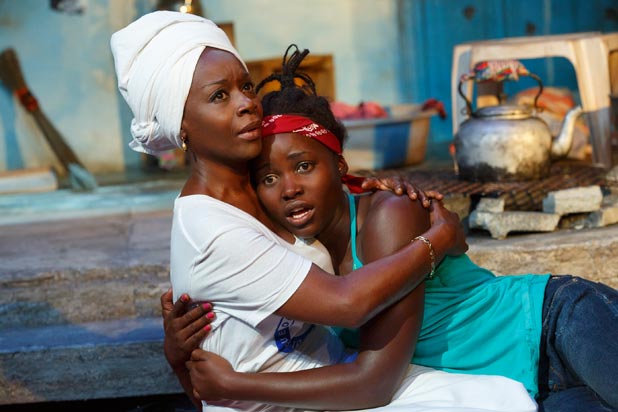 Armand, in the beginning, appears to be over-stressing the humor in wife Number Three’s emotional and mental underdevelopment. She’s the simple pregnant wife, Sengbloh being the older, wiser one. Since that makes Nyong’o the new wife in this triangle, an obvious balance is established early in the play.

Liesl Tommy’s direction helps to blur some of the more blatant contours of that symmetry. But she hasn’t solved the problem of what to do with wife Number Two (Zainab Jah), who has joined the rebels as a soldier and recruits the new wife. Jah wisely lets her taut-as-steel body do most of the acting. But no sooner has this soldier been introduced than Gurira balances her brutality with a fifth character: a businesswoman turned peacemaker named Rita (Akosua Busia).

These two characters aren’t so much women as they are symbols of war and peace, respectively. The only question is whether we’re supposed to find Rita noble or absurd; Busia’s broad performance suggests the latter.

While the symmetry of the narrative is sometimes forced, the voice Gurira gives to her women’s pain never is.