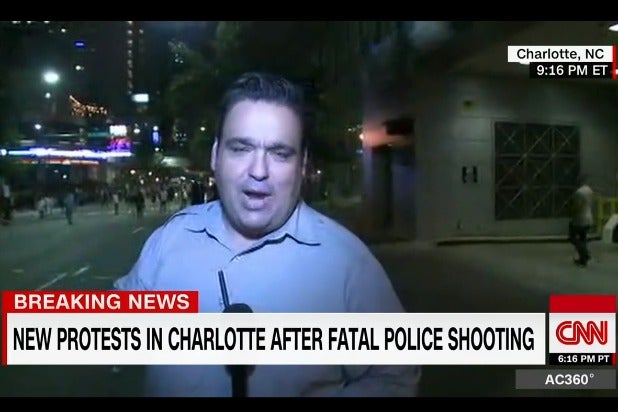 (UPDATE: Police now say that the man who was previously reported as having been shot and killed during Wednesday’s protests is in critical condition. In addition, a state of emergency has been declared in Charlotte. The story below has been updated throughout.)

CNN reporter Ed Lavandera was on live television — covering a second night of protests over the police killing of Keith L. Scott in Charlotte, North Carolina, on Wednesday night — when a demonstrator knocked him to the ground from out of the blue.

Video of the incident shows Lavandera on the streets of Charlotte, talking remotely with “AC360” anchor Anderson Cooper, when a person threw an arm or shoulder into the CNN reporter, sending Lavandera to the ground.

Lavandera did not appear to be injured and continued his report.

Protesters gathered for a second night following the police shooting death of Scott one day earlier.

As dark descended and cops lined up in riot gear, the night’s demonstrations turned violent, with police firing off tear gas and one man getting shot and critically injured in the crowd, the New York Times reports. Previous reports, citing police, said that the man had died. But those were updated later in the evening. According to the AP, police say that the wounded man was not shot by a police officer.

An officer was also injured in the protest, CNN reports. North Carolina Gov. Pat McCrory declared a state of emergency, per the AP.

The demonstrations were in response to yet more police shootings of African-American civilians, including incidents in Ohio, Oklahoma and North Carolina — where 43-year-old Scott was gunned down in the parking lot of an apartment complex on Tuesday, according to the New York Times.

Watch video of the Lavandera incident below.