It’s been over four years since recording artist Ed Sheeran randomly showed up as a Lannister soldier on HBO’s “Game of Thrones,” but the negative reaction to his cameo still stings for the “Bad Habits” singer.

“I feel like people’s reaction to it sort of muddied my joy to it,” Sheeran admitted on the latest episode of Dax Shepard’s Armchair Expert podcast, which dropped on Monday.

Sheeran’s brief appearance was set up by “Game of Thrones” showrunners David Benioff and D.B. Weiss as a surprise for star Maisie Williams, a fan of the “Shape of You” singer. He appeared in a scene where her character, Arya Stark, ran across a group of Lannister soldiers. He was singing when she came upon them in the woods, and he engaged in a short chat with Arya. 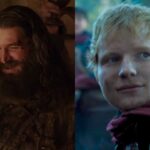 The backlash to Sheeran’s appearance — especially on social media — was instantaneous, and even “Game of Thrones” actor Kristian Nairn (who played Hodor) went on the record as saying he was against cameos on the HBO series.

“I think it’s stupid,” he told the Huffington Post in 2018. “I don’t mind gong on the record on that. I think it takes you right out of the world.”

“Especially Ed Sheeran,” Nairn added. “I was like, ‘Why is Ed Sheeran here?’ I mean, Ed Sheeran’s great. He’s a great guy, great musician, but why is he in ‘Game of Thrones’?”

The episode’s director, Jeremy Podeswa, defended the decision at the time as organic to the series.

“The truth is, everybody on the show is famous now,” he continued. “So it doesn’t mean anything to me. It’s about, are they appropriate for the role? Are they doing a good job? And it was yes, yes, yes to all those questions with him.”

Sheeran no doubt thought it was merely a fun cameo on the biggest TV show at the time, so it’s not hard to see how the joy of the experience was dampened by such a negative reaction once the episode aired.

To that end, we can probably rule a Sheeran cameo out of the upcoming “Game of Thrones” spinoff “House of the Dragon.”