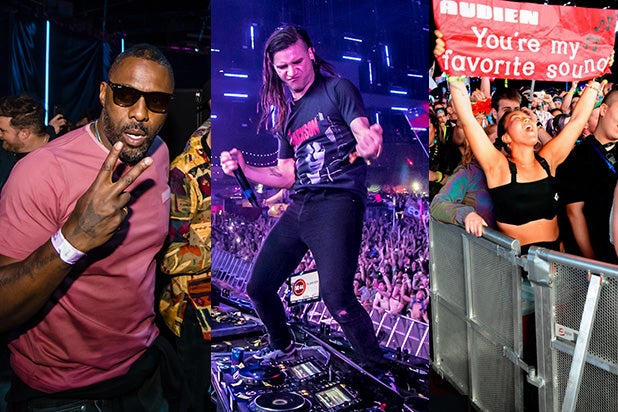 (DRB and CTL for Insomniac (2); Getty Images)
As 150,000 dance music fans, 240 artists, and a week of shoulder events across Las Vegas wind down from the 2019 Electric Daisy Carnival, we note the highlights (the return of Skrillex and a full embrace of Idris Elba) and missteps. 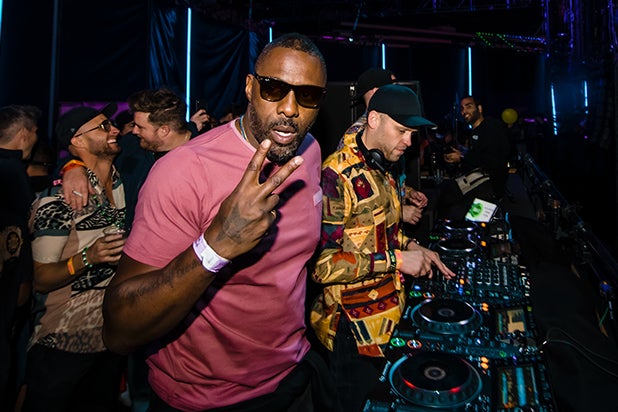 DRB for Insomniac
WINNER: Idris Elba This is not a fluke. The legitimate actor now has a legitimate international DJ career. His hour-long collaboration with UK house duo Solardo (called a "b2b" set) had organic energy, enthusiasm and joy inside their booth that is usually long gone by the time DJs are big enough to get booked for a prominent show like the Neon Garden at EDC. 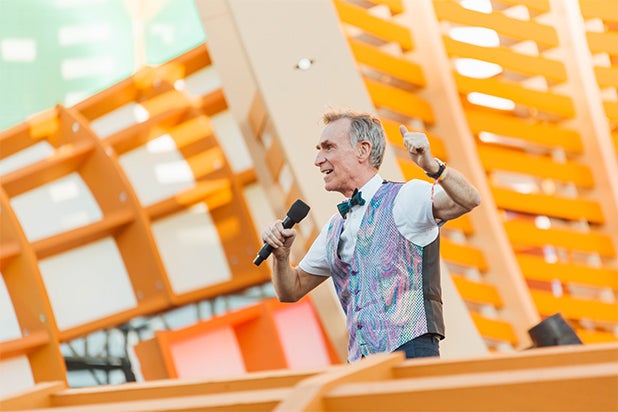 Virisa Young for Insomniac Events
LOSER: Bill Nye The "science guy" served as the opening ceremony emcee, but either didn't understand or wasn't given parameters for his role. Instead of a token appearance (a wave and a proverbial toast from an icon of millenials' youth), he launched in to what sounded like his stump speech from "Science Con." He blabbered on about how he get got interested in science, referred specific internet URLs to an amped up crowd waiting for bass music, and asked the crowd to go see a rocket launch. To make it worse, his livestream audio dropped out for most of his speech. Nye was booked as a thematic crossover to the idea of "kinetic energy," which ties in to... 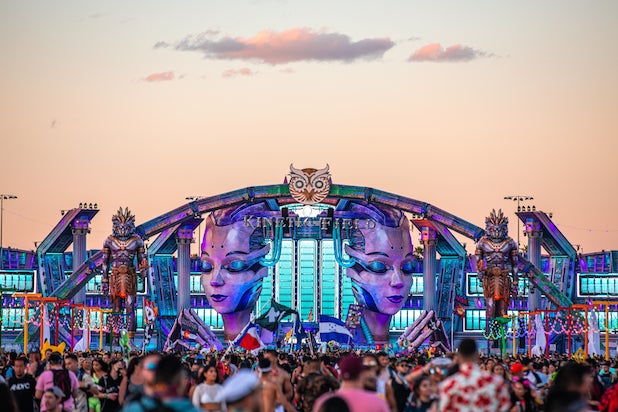 Calder Wilson for Insomniac Events
WINNER: The "Kinetic Field" and Maximalist Design This was the newly redesigned "Kinetic Field" (main stage) based on the concept of kinetic energy. By sidelining video screens, the bionic human sculptures took center stage. 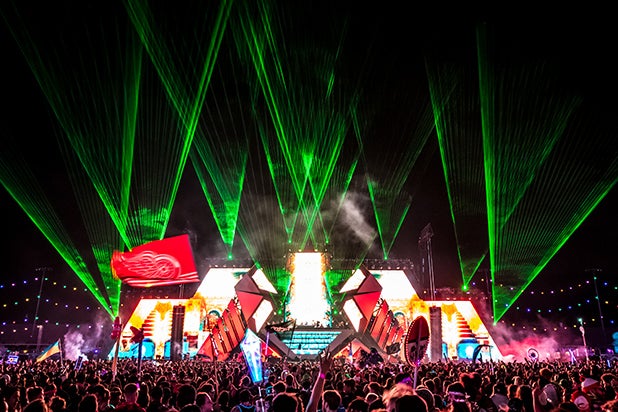 PP for Insomniac
This stage (the Basspod) was also newly redesigned for 2019.  Keep in mind that this genre-specific area is only the fifth or sixth biggest stage at this festival, but would overshadow the main stage at many other festivals. 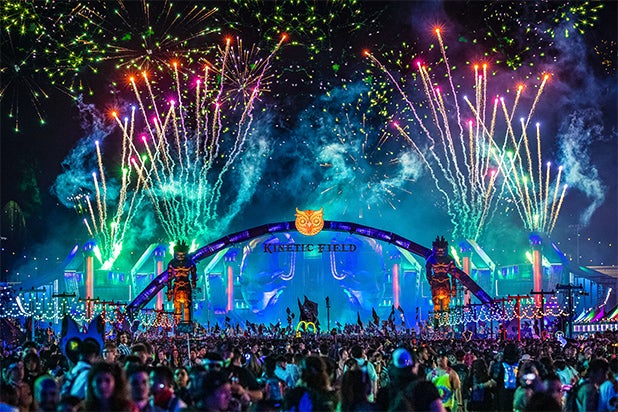 AGP for Insomniac
This is why the festival is nicknamed "Under the Electric Sky." Also Read: Coachella 2019 Final Report Card: Winners and Losers, From Kanye West to Zedd (Photos) 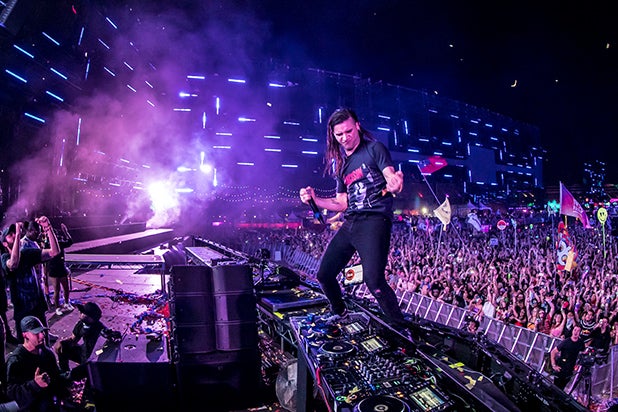 CTL for Insomniac
WINNER: Skrillex The icon of 2010's electronic music was a surprise addition to the lineup, announced hours before Night 2 got underway. He tilted the gravity of the Las Vegas Motor Speedway, drawing a massive crowd to his stage early (10:30 p.m.). He delivered a "something for everyone" set not unlike his former Jack U collaborator Diplo's well-received sets at Coachella last month. He scrambled the default template for how DJs use lights and cameras during a show and proved to be among the most gracious of the performers. "Pasquale Rotella, thank you for having me as your guest," he said as he finished. He also introduced the lesser known Slander, who was up three minutes after him, a courtesy that comics extend universally in comedy clubs but one I didn't hear any other performer do at the festival. Intentional or not, I'm not sure what Skrillex was getting at with his Michael Jackson shirt. 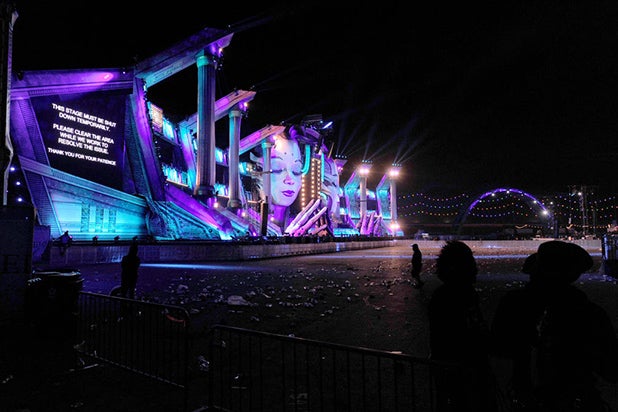 Getty Images
SPLIT DECISION: A "Walked Back" Evacuation Order Near the end of Tiesto's main stage set Saturday night, messages appeared on the screens advising guests that the venue was being evacuated due to high winds and seek shelter in a car. However, a venue-wide evacuation was not actually ordered. Many stages and areas continued on schedule. Hours later, Insomniac tweeted a clarification that only certain stages were being closed and that people who had been advised to leave could return. At 3:20 a.m., for the thousands who already took an hour-plus trip back to the strip and followed orders ("leave calmly"), it was an infuriating miscommunication. 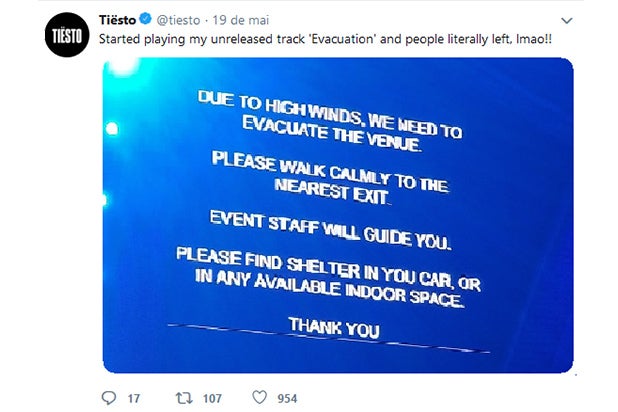 Twitter/Tiesto
SILVER LINING: Humor In the wake of the evacuation fiasco, Tiesto tweeted that his new single "Evacuation" was instantly having a huge impact. Reddit user "WinslowPete" later won the snark award by chiming in that "Tiesto's marketing techniques have really gotten out of hand." 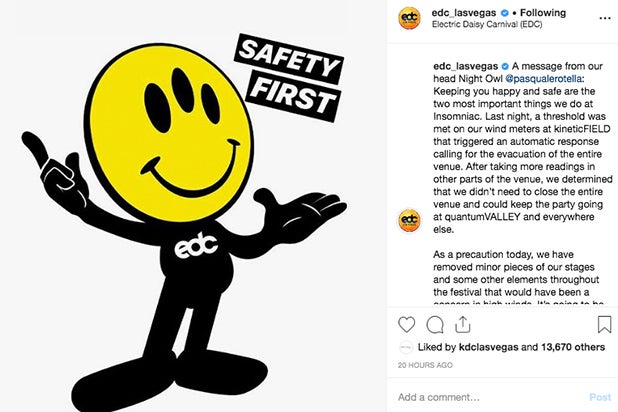 Instagram/EDC_Las Vegas
WINNER: Transparency and Communication Between 7 a.m. and 7 p.m. Saturday, organizers solved opening night shuttle snafus with a plan that included bussing drunken ravers through the highly secure Nellis Air Force Base. The always hyper-communicative Insomniac and its leader Pasquale Rotella then took to social media after the shutdown to explain the evacuation timeline and their "safety first" mantra. These rapid responses suggest they had contingency plans for a variety of situations and available manpower to make meaningful changes on the fly. Further proof: they rebooked Kaskade and RL Grime (two artists who never got to play Saturday night), moving them to the Campground at dawn and on a different stage the next night, delivering an instant make-good despite that "lineup subject to change" fine print that haunts every festival lineup poster. 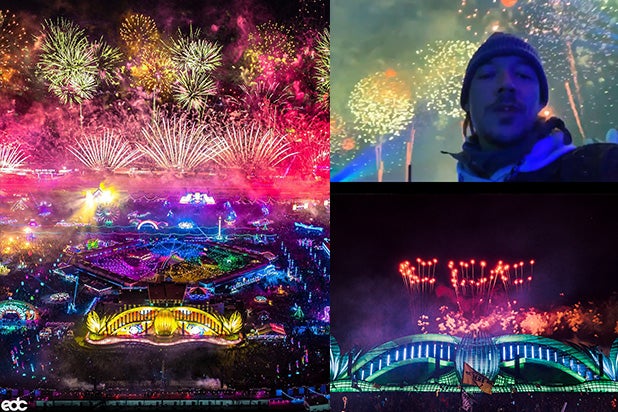 Insomniac; Instagram/Diplo; Instagram/Dillon Francis
WINNER: Fireworks Most municipalities can't afford a 4th of July show on this scale. Globetrotting Diplo (top right) found it to be Instagram-worthy even for him, putting up video selfies of himself enjoying the pops. In the bottom right is the signature blast, the letters E-D-C spelled out in the sky. 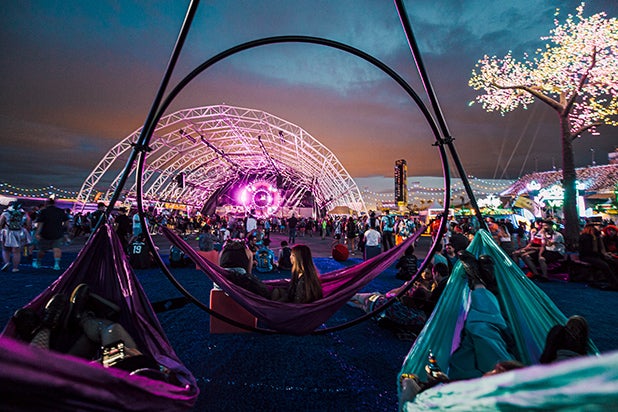 Keiki-Lani Knudsen for Insomniac Events
WINNER: Vibes With turf, large-scale art and vignettes across the grounds, producers Insomniac turned endless speedway asphalt in to something comfortable. 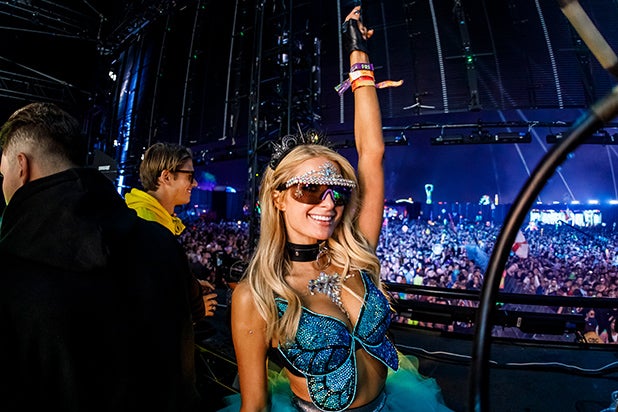 TJH for Insomniac
MEH: Paris Hilton at EDC  Pros: She comes every year. This year she was spotted on two different nights... and she's a working DJ in some corners of the planet (not at EDC), so she's arguably there "for the right reasons," meaning, the music and her friends at the company. Cons: Her dated brand of mid-2000's aspirational social climbing and vertical caste groupings doesn't square with the "All Are Welcome Here" sloganeering and the egalitarian ethos of mutual acceptance that this brand propagates all year. (See the next photo.) Another Pro: To be fair, she has good taste. I spotted her rocking out on the rail of the VIP during Skrillex. 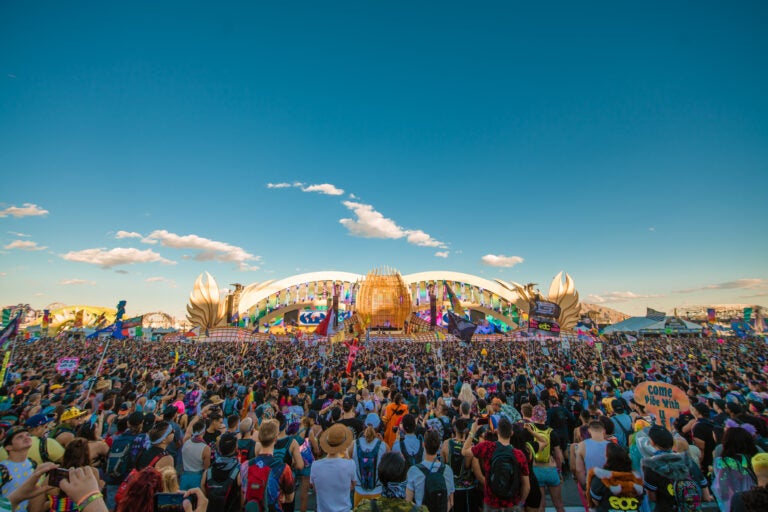 DRB for Insomniac
NOTABLE: Good Behavior Through the first two nights of the festival, not a single one of these ravers got a DUI. Media reports indicated 36 other felony or gross misdemeanor arrests over the opening nights, which is about a third of what comparable festivals have. 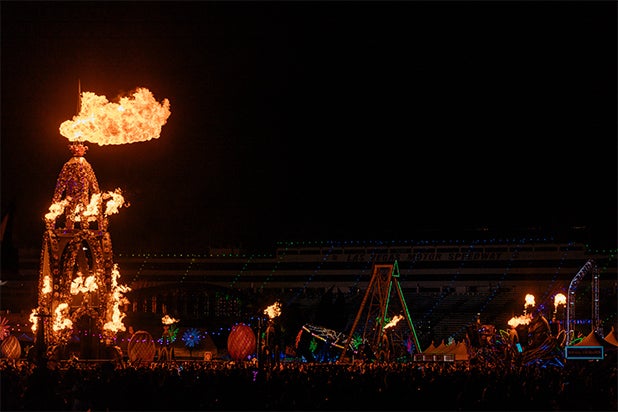 Adi Adinayev for Insomniac Events
WINNER: The Move to May Only a year after moving the date from the scorching 100-degree heat of June to May, the schedule change was barely discussed in the run-up to this year's EDC. This year temperatures late at night were in the 50s. For health and hydration, "a little too cold" is always the choice over "way too hot." That fire wasn't just for decoration. It was needed. 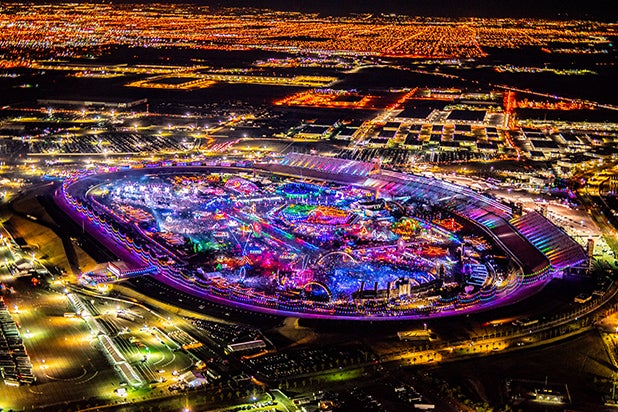 Graham John Bell for Insomniac Events
Insomniac announced that EDC will return in May 2020 via a cleverly placed billboard that went up on the highway outside Las Vegas Monday morning. Also Read: ‘Rocketman’ Film Review: Elton John Gets a Musical Fantasy That Sometimes Achieves Liftoff
x
Looks like you're enjoying reading