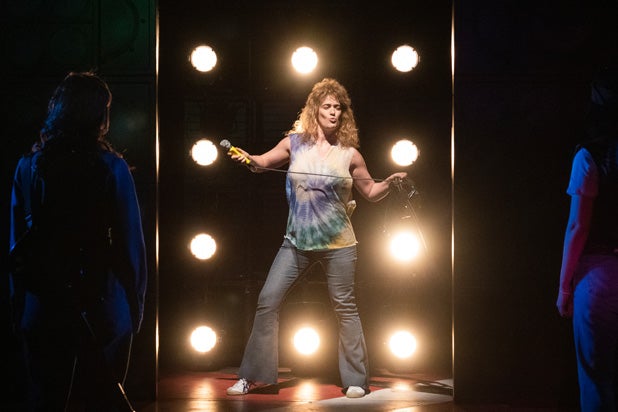 Male drag is a staple of the theater. Female drag, uh, not so much. So it’s good news to report that Amy Staats’ new bio-comedy, “Eddie and Dave,” makes spectacular use of its female actors in male roles, in this case, the rockers Alex and Eddie Van Halen and David Lee Roth. “Eddie and Dave” opened Tuesday at the Atlantic Theater Company.

Yes, the men of Van Halen are being played by women, although that fourth band member, Michael Anthony, gets an entirely different kind of stage treatment, which will not be revealed here but is worth more than a few hearty laughs.

Two summers ago, the Public Theater staged a disastrous “The Taming of the Shrew” with an all-female cast at the Delacorte Theater in Central Park. When men play women, it’s inherently funny because what you get are a lot of larger-than-life women. Going in reverse with the Bard, the female actors of “Shrew” simply turned themselves into a lot of little men trying to be gruff and vulgar, and coming up, well, short.

In “Eddie and Dave,” Megan Hill (Dave), Amy Staats (Eddie) and Adina Verson (Al) do something far more imaginative under Margot Bordelon’s super-sharp direction. They startle us by being the little boy that is at the heart of every rock-and-roll star. They’re not playing men. They’re playing petty, pampered, spoiled, solipsistic little boys who only occasionally resemble adults, but for the most part spend their time trashing hotel rooms and showing up late for an important recording session.

These female actors also have that androgynous thing down pat, what Mick Jagger personified before he turned 30. Hill, especially, sports Jagger’s obscene mouth, and she uses it and the rest of her body for magnificent semi-virile effect.

Vanessa Aspillaga, playing an MTV VJ, narrates the rise and fall and semi-resurrection of the band known as Van Halen, starting with their disastrous reunion at the MTV Music Awards in 1996. I’m not sure if Aspillaga is playing male or female, but unlike most narrators in the theater, she’s worth watching in her own right.

The credits includes the following line: “The only thing real about this play is the author’s love for a certain band.” Experts on Van Halen may disagree. Included here is Eddie’s unlikely marriage to erstwhile TV star Valerie Bertinelli, whom everyone simply calls Val in “Eddie and Dave,” and is played with hysterical feminine charm by Omer Abbas Salem. He towers over Staats, but they don’t let that get in the way of showing tender love for each other.

Staats hasn’t found quite the right ending for “Eddie and Dave.” The comedy and the chaos tend to dribble off in the last 10 minutes of this 90-minute play. Maybe she should end things with David proclaimed as the “Este Lauder of tattoos.”

TheWrap’s Best & Worst 2018: Only in retrospect do the year’s biggest misfires bring smiles to a theatergoer’s face

TheWrap theater critic Robert Hofler looks back on some of his most cringe-inducing nights at the theater in 2018.