In the same way that British ski jumper Eddie “The Eagle” Edwards just wanted to compete in the Olympics with no thought of winning medals, the sports biopic “Eddie the Eagle” has no pretensions whatsoever about being art, or even necessarily good. It just wants to make you love it, from its uplifting bromides to a training montage set to Hall and Oates’ “You Make My Dreams.”

As cinema, it’s an avalanche of feel-good clichés, but as an audience-pleasing machine, it relentlessly pursues its goal and will probably win over viewers who surrender to it.

A childhood marked by knee problems and leg braces hasn’t stopped Eddie (Taron Egerton, “Kingsman: The Secret Service”) from his lifelong dream of competing in the Olympics. After improvised backyard attempts at track and field training fail spectacularly – we see one pair of ruined spectacles after another get tossed into a biscuit tin – he finally decides to pursue the Winter Olympics, becoming an adolescent skier of some repute.

When the posh snobs who run the British Olympic ski team conspire to keep working-class Eddie off the squad for the 1988 games in Calgary, Eddie discovers – in an “Air Bud”-worthy bit of plotting – that Britain hasn’t had a ski-jumper since the 1920s, and he becomes determined to make one successful landing in competition so that he can compete in Canada. This goal involves traveling to a training center in Germany where he crosses paths with a bunch of mean Scandinavians, as well as hard-drinking plow driver Bronson Peary (Hugh Jackman), who turns out to be a former US ski champ who frittered away his early promise.

You’ve probably already guessed that Eddie’s purity of spirit, can-do attitude and general gumption melts the frosty Bronson, who eventually becomes Eddie’s coach, and that hard work (and several more training montages) makes Eddie’s dreams come true. And who needs Olympic gold when you can finally get your father’s approval? Eddie seeks it from his own dad; Peary, from former coach and paternal surrogate Warren Sharp, played briefly by a somnambulant Christopher Walken.

Also Read: Tom Hardy Is Hugh Jackman's Pick to Take Over as Wolverine 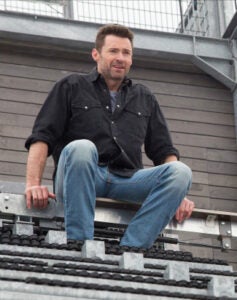 Director Dexter Fletcher (it’s his third feature, but he’s spent the last 40 years acting in film and television) and screenwriters Sean Macaulay and Simon Kelton never veer from formula, not even to the point of pushing that formula to new boundaries. But their work in competent, and Fletcher coaxes crowd-pleasing (if one-note) performances from his two leads, as well as from Jo Hartley (“This Is England”) as Eddie’s steadfast mum.

The ski footage isn’t going to make anyone forget “Downhill Racer,” but cinematographer George Richmond (“Kingsman: The Secret Service”) does allow us to teeter on the edge of Eddie’s skis as he makes his way from the 15m jump to the 40m to the 70m to – in competition in Calgary, no less – the vertiginous 90m. All of this is set to Matthew Margeson’s aggressively 1980s-flavored score of synth and drum machines, which sounds like a collaboration between Vangelis and Tangerine Dream, all stuffed into the same pair of parachute pants.

Peary tells Eddie about the “jumper’s paradox,” which says you have to lean into a jump in order to go further and land safely; “Eddie the Eagle” is designed for audiences who will throw their weight behind the film’s schmaltz and sentimentality. Anyone unwilling to commit to the movie’s shamelessness will feel like they’ve hit the ground headfirst.