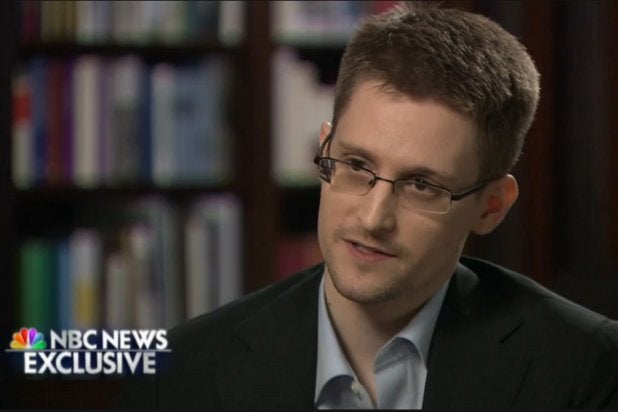 It was an interview that everyone had been looking to land, and NBC News scored it. Brian Williams sat down with famed NSA leaker Edward Snowden for his first televised American interview. The pair met for about five hours at a hotel in Moscow. NBC aired an hour-long special on Wednesday night with highlights from that talk.

See video: Edward Snowden Reveals to NBC’s Brian Williams: ‘I Was Trained As a Spy’

Snowden has been living in exile in Russia after leaking reams of classified data to journalists Glenn Greenwald and Laura Poitras. After they took his story public, Snowden became an instant celebrity. He also became charged with espionage by the U.S. Department of Justice. While attempting to travel to Latin America, Snowden found himself trapped in an airport in Moscow after his passport was revoked. After 39 days, he was granted temporary asylum in Russia.

“I may have lost my ability to travel,” Snowden told Williams. “But I’ve gained the ability to go to sleep at night and to put my head on the pillow and feel comfortable that I’ve done the right thing even when it was the hard thing. And I’m comfortable with that.”

But able to sleep at night doesn’t mean he’s content living in exile. “I don’t think there’s ever been any question that I’d like to go home,” he said. “Now, whether amnesty or clemency ever becomes a possibility is not for me to say. That’s a debate for the public and the government to decide. But if I could go anywhere in the world, that place would be home.”

That didn’t mean Snowden was willing to simply accept a long prison sentence, though. He said he had no desire to “walk into a jail cell to serve as a bad example for other people in government who see something happen, some violation of the constitution, and think they need to say something about it.”

That’s why Snowden felt compelled to act. “The Constitution of the United States has been violated on a massive scale,” he said. “Had that not happened, had the government not gone too far and overreached, we wouldn’t be in a situation where whistleblowers were necessary. I think it’s important to remember that people don’t set their lives on fire … and burn down everything they love, for no reason.”

Snowden is currently facing three federal charges for his actions, each with a maximum potential prison sentence of 10 years, with more charges possible. “What has been lain against me are not normal charges,” Snowden said in response to a question about why he doesn’t just come home and face the music.

“They’re extraordinary charges,” he said. “The Espionage Act provides anyone accused of it no chance to make a public defense. You can’t argue to the jury that what you did was in the public interest. You are not allowed to argue based on all the evidence in your favor, because that evidence may be classified, even if it’s exculpatory. And so when people say, “Why don’t you go home and face the music?” I say, you have to understand that the music is not an open court and a fair trial.”

Ultimately, Snowden said he felt vindicated by the Pulitzer Prizes awarded to two of the organizations he’d given documents to, The Washington Post and The Guardian. “When you look at the way the government has had a chance to chime in on this and to make their case and when you look at the changes that it’s resulted in, we’ve had the first open federal court to ever review these programs declare it likely unconstitutional and Orwellian,” he added.

“Now you see Congress agreeing that mass surveillance, bulk collection needs to end. With all of these things happening that the government agrees — all the way up to the president again — make us stronger, how can it be said that I did not serve my government?” Snowden wondered. “How can it be said that this harmed the country, when all three branches of government have made reforms as a result of it?”