For the Stalin-averse, ravenously curious Eisenstein, fresh from a hobnobbing trip to Hollywood and commissioned by novelist Upton Sinclair to make a picture called “Que Viva Mexico,” his south-of-the-border excursion to Guanajuato was, according to Greenaway’s reference to John Reed’s book about the Communist revolution, “ten days that shook Eisenstein.”

Right away Greenaway, never one to hold back, makes aesthetically literal his ideas about a theoretically-minded but still childlike artist’s transformation, as scenes of the frizzy-haired, boisterous director (played by Finnish actor Elmer Bäck) being driven into picturesque Guanajuato shift between black-and-white and color, and often get split into triptychs. (There are also brief flashes from his silent classics.)

At his hotel, where he swats at “Soviet flies,” gets naked immediately, bounces on the bed and admonishes his penis to behave, he meets his local guide Palomino Cañedo (Luis Alberti), a dashing comparative religions teacher. Almost forced to slow down his fervid imagination and exuberant naivete, Eisenstein feels the weight of the country’s lifeblood in its nighttime bacchanals and museums full of mummified corpses. 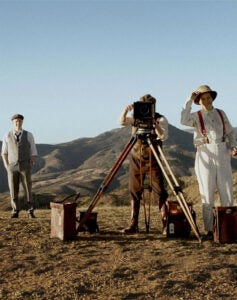 Later in the filmmaker’s hotel room, Cañedo takes on the role of a different sort of guide, pouring olive oil down Eisenstein’s back while delivering a speech about the Old World, the New World, the history of syphilis, and transmigration. A smiling Eisenstein then takes up the metaphorical mantle, proudly equating the loss of his virginity to his country’s own revolution. As gay sex scenes go, it’s its own movie benchmark of sorts: seductive, serious, absurd, funny, and for Greenaway, something of a graphic triumph.

As a character, Eisenstein proves to be one of Greenaway’s more indelible heroes. Typically in his films, actors are often text-spewing cogs in a grander audio-visual display, and while that’s mostly the case here, Bäck still manages to be a lively, pulsating force. Looking and behaving initially like a long lost Marx brother (I don’t mean Karl’s kin), he suggests a mad clown crashing to earth, then rising again as the sadder, wiser kind.

Primarily, though, the director himself is the central performer, employing a variety of image manipulations, lavishly dressed sets (namely Eisenstein’s bed-centric, lit-through-glass-flooring hotel room), and compositional flourishes that range from expectedly sumptuous to innovatively dazzling. In one virtuosic, digitally manipulated shot, an extended restaurant argument between an exasperated Eisenstein and his increasingly concerned American backers is tracked with the camera behind pillars in a horseshoe arc, with the actors occasionally doubled in the frame (and separated by the pillars) to suggest the mounting, circling pressure Eisenstein felt both to please Sinclair and to assuage the suspicious Stalin.

Like many of Greenaway’s films “Eisenstein in Guanajuato” is ultimately an indulgent crash course in the dense, occasionally garish nature of artistic endeavor. Willfully provocative and hardly subtle in style and content, Greenaway is eager here to share his passion for an idol whose strenuous need to create, to be himself, was ultimately tripped up by the divisive limitations of home, politics, and controlling benefactors.

By the end, as a discouraged Eisenstein departs Guanajuato — “heaven” he calls it — wearing a skeleton mask and crying, while Greenaway narrates a few further indignities in the filmmaker’s life (the fate of “Que Viva Mexico,” Soviet homosexuality laws, how Eisenstein died), the melancholic simplicity feels right. This unusually feeling-driven Greenaway movie still isn’t for everybody, but that feels right, too. He’s been able to make his art the way he’s wanted to for decades — like “Eisenstein in Guanajuato,” that’s a fitting tribute to a troubled, glorious iconoclast.