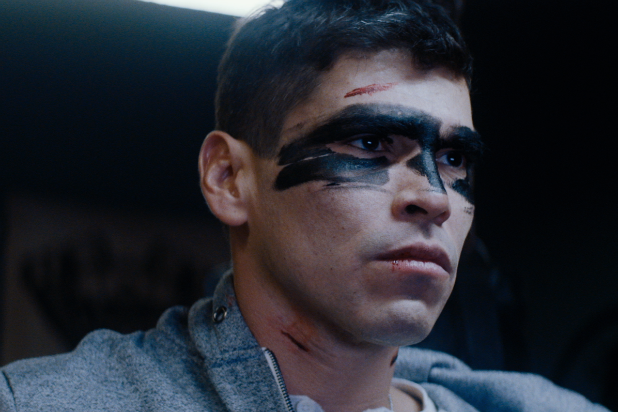 “El Chicano” opens deep in the heart of East Los Angeles — or East Los, if you’re local — as a group of Latinx kids watches an act of vigilante justice in their neighborhood. A masked figure frightens off most of the gang members by making the sound of a cucuy — a boogyman — and striking his target with a deadly Aztec sword before disappearing into the night.

Twenty years later, it’s still in their memories. Diego (Raúl Castillo, “We the Animals”) has grown up to become a handsome LAPD cop with a promising career ahead of him. His superior, Captain Gomez (George Lopez), seems especially fond of Diego and tries to help him get a leg up on solving a few career-making cases. Diego’s boyhood friend now goes by the name of Shotgun (David Castañeda, “The Umbrella Academy”) and has since gotten wrapped up with the Mexican cartel. It’s the same doomed path that claimed Diego’s twin brother, Pedro (also played by Castillo). By chance, a case comes Diego’s way that has ties to his brother and his old friend, pushing him to solve the mystery of that violent night from his childhood.

Director Ben Hernandez Bray, along with co-writer and producer Joe Carnahan (“The Grey”), has created a superhero mythology out of East L.A., a Batman without money but rich in backstory and culture. In keeping with that spirit, “El Chicano” feels rough around the edges in certain moments, like scenes that are too dark to see clearly or an uneven tone throwing off the story’s mood.

The twin storyline was a bit confusing, but the battle between two former childhood friends provides much-needed tension. The idea of two boys growing up in the same environment but choosing different paths in life calls to mind the James Cagney movie “Angels with Dirty Faces”; in that film, life’s circumstances lead to one boy growing up to be a gangster and the other a priest, and the priest wrestles with his survivor’s guilt and the need to save his friend before it’s too late. Diego has no such moral calling to spare his friend’s life.

For his part, Castillo makes the best of the clunky dialogue and cliché lines, but the story never lets his acting chops shine through. His character spends most of the movie angry, which doesn’t allow for much emotional range. Castillo is at the mercy of the film’s earnestly serious tone, which at its worst takes the fun out of fight scenes. The lackluster fight choreography and camerawork do little to amp up the film’s pacing in the second and third acts.

Identity is at the heart of this movie, and as superhero origin stories go, the mythology in “El Chicano” is one of the film’s strengths. There are references to the Aztecs, La Virgen de Guadalupe, pan dulce on a tombstone, the Zoot Suit Riots and low-rider culture, and none of it feels forced, painfully reductive or whitewashed. Maybe it’s too many tributes at once, but the scarcity of movies like “El Chicano” may justify the rush to load in as many references as possible.

However, that warm cultural recognition does not extend to the Mexican characters in the movie, many of whom are reduced to fear-mongering cartel tropes. Like in this year’s remake of “Miss Bala,” the Mexicans in this movie are the bad guys, the drug-running cartel members ruining it for the rest of us in the United States. It’s a subtle way of saying “we are not like them,” which does nothing to undo the damage of hateful rhetoric aimed at Latinx and Latin American people.

Identity is complicated. In the same way a movie like “Scarface” will always make me cringe, there will be Latinx audiences tired of watching gangs and cartel wreck havoc and take lives. For too long, these violent narratives defined the U.S. Latinx experience, and a movie like “El Chicano” does not transcend those stories. It perpetuates them.

A few pieces I’ve read have compared “El Chicano” to last year’s watershed releases of “Black Panther” and “Crazy Rich Asians,” but that’s just simply not true. Those movies were made with studio backing, and “El Chicano” had to circumvent Hollywood just to be made at all. If anything, “El Chicano” reveals just how far Latinx stories have yet to go to make it in mainstream American cinema.