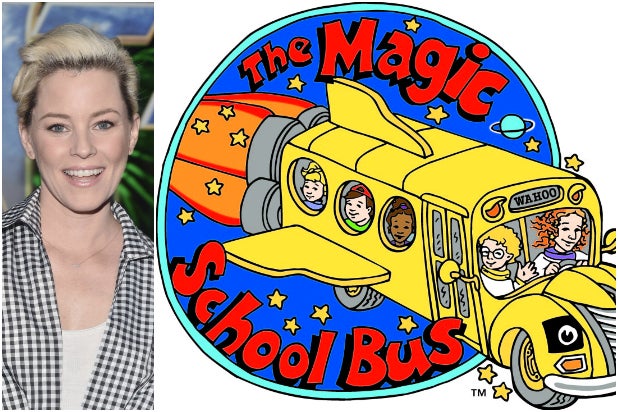 “The Magic School Bus” is coming to the big screen. A hybrid live-action and animated feature film based on the children’s books is in the works, and Elizabeth Banks is set to star as the zany and adventurous teacher Ms. Frizzle, Scholastic Entertainment announced Thursday.

“The Magic School Bus” film is a production of Scholastic Entertainment, Brownstone Productions, Marc Platt Productions and Universal Pictures, and it will be the first time we’ll get to see Ms. Frizzle’s class on the big screen in the 26-year history of the Scholastic brand.

The upcoming “Magic School Bus” film is based on the book series by author Joanna Cole and illustrator Bruce Degen about the intrepid Ms. Frizzle and her class who set out on field trips to learn about the world of science in their magic school bus that can transform, shrink or expand in whatever way necessary to help kids explore and learn.

Banks will not only star as the teacher extraordinaire Ms. Frizzle, but she’ll also produce “The Magic School Bus” along with Max Handelman for Brownstone. “La La Land” producer Marc Platt is also producing with Adam Siegel for his Marc Platt Productions, as are Scholastic Entertainment president and chief strategy officer Iole Lucchese and SVP and general manager Caitlin Friedman.

Alison Small will executive produce for Brownstone. Ryan Christians from Marc Platt Productions will oversee production on “The Magic School Bus” with Sara Scott and Lexi Barta from Universal Pictures.

“We are delighted to bring to life the iconic Ms. Frizzle and her zest for knowledge and adventure in a fresh new way that inspires the next generation of kids to explore science and supports the dedicated teachers who help make science real and accessible for young learners every day,” Lucchese said in a statement. “We’re also extremely excited to be working with such top-tier partners as Elizabeth Banks, Marc Platt Productions, Brownstone Productions, Universal Pictures, and all of the amazing talent assembled for this noteworthy feature film.”

“The Magic School Bus” books have over 80 million books in print worldwide. The books were first adapted into the critically-acclaimed PBS series in 1994 that featured Lily Tomlin as the voice of Ms. Frizzle. The show aired for 18 years in the U.S. and has been broadcast in more than 100 countries.

An animated sequel to the original series, “The Magic School Bus Rides Again,” featuring Kate McKinnon as Ms. Frizzle’s sister, Fiona, debuted on Netflix in 2017, and Lin-Manuel Miranda sang the theme song for the show.

Banks stars in the series “Mrs. America” alongside Cate Blanchett and most recently directed, produced and co-starred in the remake of “Charlie’s Angels.”