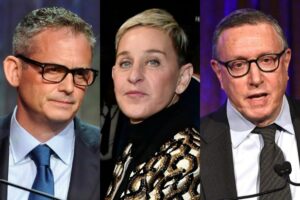 Following weeks of reporting and a third-party investigation into the toxic work culture at “The Ellen DeGeneres Show,” one former producer has chosen to speak publicly about her experience with what she described as a “culture of fear” in the show’s earliest days.

Hedda Muskat was an early hire on “The Ellen DeGeneres Show” back in 2003 when the show was still in development. A veteran of “The Howie Mandel Show” and “The Martin Short Show,” she was among a handful of writers and producers recruited by executive producer Andy Lassner to flesh out what “Ellen” would later become.

But within a year and a half of joining, Muskat said she was sidelined in favor of a younger, less experienced producer before being pushed out entirely.

Muskat was among the dozens of current and former employees who anonymously discussed their experiences in a pair of bombshell reports from BuzzFeed News about the hostile workplace behind the scenes of “The Ellen DeGeneres Show.” The staffers described instances of racial discrimination and sexual misconduct, as well as a generally inhospitable work environment, which Muskat says started with DeGeneres herself and took shape as far back as 2003.

“I had never seen this before,” Muskat told TheWrap this weekend. “I had never been around a toxic host.”

Representatives for “The Ellen DeGeneres Show” and Warner Bros. Television declined to comment for this story, instead pointing to a statement from last week in which the studio acknowledged “deficiencies related to the show’s day-to-day management” with a promise to implement “appropriate measures to address the issues that have been raised.”

One incident — a staff meeting with DeGeneres to introduce then-new executive producers Ed Glavin and Mary Connelly — stands out in particular. Glavin, who was at the time still new to the show, openly screamed at a crew member in front of the entire room. “He just went off on them,” Muskat said. “His whole face turned red. … We were stunned.”

“I was waiting for Ellen to say something. ‘Whoa, Ed, don’t talk like that,'” she said.

The four dozen ex-employees who spoke to BuzzFeed were unanimous in their description of Glavin’s fear- and intimidation-based management style, but some doubted DeGeneres herself was aware of the way the show was run. Recalling the host’s response to Glavin’s shouting, Muskat disagreed.

“Do you know what she did? She giggled,” Muskat said. “She crossed her legs up on the chair and she said, ‘Well, I guess every production needs their dog’ … And from then we knew. Ed was going to be the barking dog — her dog.”

“You could just see everybody’s faces go stiff,” she said. “We’re professionals; we’re adults. We don’t need a dog to get us to do our jobs … She was the only one giggling.”

In an apology to staff last week, DeGeneres distanced herself from the accusations of misconduct. The host said she was “disappointed to learn” about the incidents described, having previously “relied on others to do their jobs as they knew I’d want them done.”

“Ed didn’t act independently,” Muskat said. “It was Ed and Ellen and Andy and Mary. Ed was a bully, but he worked for Ellen. It was her show.”

Muskat said she wasn’t aware of any sexual misconduct by Glavin or others during her time on the show, but diversity issues were apparent given the overwhelmingly white staff in those early months. “I wasn’t privy to hiring decisions … [but] I was there full time for 12 months, and I did not see a diverse staff,” she said. “And if I’m not seeing them there, that means they’re being shut out.”

By 2004, once it became clear Muskat wasn’t one of the few in DeGeneres’ good graces, her experience on the show began to deteriorate. Muskat said she was repeatedly sidelined in favor of a younger male producer, slowly stripped of responsibilities like writing her own segments and appearing on set to greet and prepare the guests she had booked.

“One day I get called into the office,” Muskat recalled. “Ed says to me, ‘You know, Hedda, we’re really loving your segments. I don’t know how you do it. We’re going to need all your sources.’ … I’ve worked 18 years to build those sources. Those sources are why you hired me.”

She refused. “From that day on, I felt a turn, that I was really on everybody’s s—list,” she said.

Muskat was eventually let go in May 2004, days before the Daytime Emmy Awards ceremony where “The Ellen DeGeneres Show” would win Outstanding Talk Show with a reel featuring segments Muskat had produced.

“They call me in and Ed says, ‘Congratulations on the nomination. We really appreciate what you’ve done, but we no longer need your services,'” Muskat remembered. When asked if she had done anything wrong, she said Glavin replied that they were “taking the show in a different direction.”

Muskat won her second Emmy a year later, when her name and work were once again included in the show’s submission for the following season. She attended both ceremonies.

“I could have easily done that job for the rest of my life. I knew it inside and out,” Muskat said.

DeGeneres’ apology last week came alongside the announcement from Telepictures and Warner Bros. Television about an investigation into the show’s culture, as well as unspecified “staffing changes” to come. Glavin is reportedly among those leaving the show. (Warner Bros. has declined to comment on specific staffing moves.)

“It will not make a difference,” Muskat said. “Because she is who she is.”