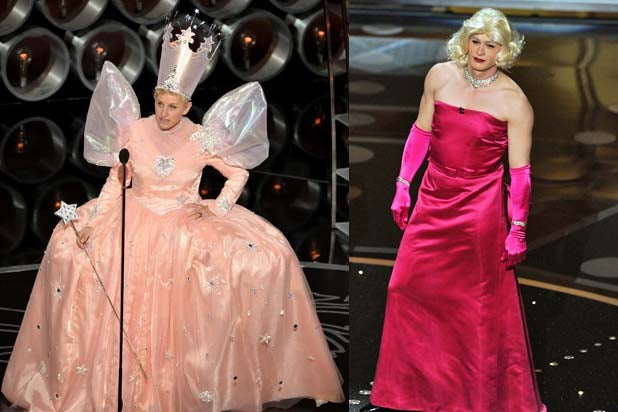 Ellen DeGeneres isn’t the first Oscar host to don a dress for laughs. Although, she probably heard more laughter than the last person who did it.

James Franco let Anne Hathaway wear the pants (and carry the entire show) during the 83rd annual Academy Awards in 2011 when she wore a tuxedo and he walked on stage in a not-so-pretty pink dress for a bit.

Franco’s dress was a reference to Marilyn Monroe, while DeGeneres’ channeled “Wizard of Oz” character Glinda the Good Witch right after Pink’s tribute to the 1939 fantasy film, which was nominated for Best Picture.

We can probably all agree that DeGeneres delivered a better, overall performance on the Oscar stage, but we’re curious: Whose pink dress was the best?