Ellie Kemper has apologized after an old photo resurfaced of the actress participating in a beauty pageant that has racist and antisemitic origins. In the photo, which caused an uproar online last week, a teenage Kemper is shown at St. Louis’ Veiled Prophet Ball, which has previously been targeted by Black Lives Matter for creating and fueling racial tension.

“Hi guys — when I was 19 years old, I decided to participate in a debutante ball in my hometown. The century-old organization that hosted the debutante ball had an unquestionably racist, sexist and elitist past,” Kemper wrote in an Instagram post on Monday. “I was not aware of this history at the time, but ignorance is no excuse. I was old enough to have educated myself before getting involved.”

“I unequivocally deplore, denounce and reject white supremacy,” she added. “At the same time, I acknowledge that because of my race and my privilege, I am the beneficiary of a system that has dispensed unequal justice and unequal rewards.” 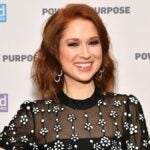 Kemper concluded her apology by saying, “I want to apologize to the people I’ve disappointed, and I promise that moving forward I will listen, continue to educate myself, and use my privilege in support of the better society I think we’re capable of becoming.”

In 1999, Kemper was crowned Queen of Love and Beauty, a title bestowed each year on one debutante, at the pageant, which traditionally excluded non-white attendees. Kemper was a student at Princeton at the time. According to a 2014 article in The Atlantic, the event’s organizers “emphasized the existing power structure” and banned Black and Jewish members.

The Veiled Prophet Ball has no known ties to the KKK, but has been historically controversial. The event, which is similar to a debutante ball in which parents present their children to society, has been around since the late 1870s and had an exclusionary past, according to the Atlantic piece.

You can read Kemper’s full apology here and above.