Twitter users were divided after a photo of actress Ellie Kemper being crowned the 1999 Queen of Love and Beauty at St. Louis’ Veiled Prophet Ball resurfaced According to a 2014 article in The Atlantic, the event’s organizers “emphasized the existing power structure” and banned Black and Jewish members.

The social media divide started with a tweet: “So was no one gonna tell me Ellie Kemper aka Kimmy Schmidt was crowned KKK queen in 1999?” asked one user, posting an old newspaper photo of the actress in a white gown.

The Veiled Prophet Ball has no known ties to the KKK, to be clear, although it has been targeted by Black Lives Matter in the past for what organizers see as its upholding of power structures in the area. The event, which is similar to a debutante ball in which parents present their children to society, has been around since the late 1870s and had an exclusionary past, according to the Atlantic piece. 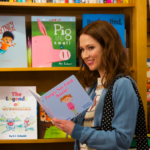 “Created in 1878 by white male community leaders, the Mystic Order of the Veiled Prophet of the Enchanted Realm sought to recreate the Mardi Gras type of community-wide celebration,” says St. Louis’ own government website of the event, which is still held today. “The traditional VP celebration has represented for St. Louisans a perceived link between different components of the community in a holiday celebration, while also reinforcing the notion of a benevolent cultural elite.”

Clearly, the event is a historic and controversial one. The Queen of Love and Beauty is selected each year from among debutantes who received invitations to the ball, which traditionally excluded non-white attendees. Kemper was a 19-year-old student at Princeton when she was crowned the ball’s 105th queen.

On Twitter Sunday night, this historical context was whittled down until Kemper was branded a “KKK princess.”

“The Ellie Kemper thing is hilarious but you people don’t really think she’s like, a secret Nazi agent and not just from some dumb ass town where they make you square dance right?” wondered comedian Jake Flores.

“Ellie Kemper was in a tv show called ‘The Office’ and do you know who else had an office? Hitler,” remarked another user with sarcasm.

Ben Shapiro blasted the replies, tweeting, “There is not a single iota of evidence that Ellie Kemper is racist. So naturally, Twitter is trending her and blue checks are calling her a “KKK princess.’ What absolute garbage.”

Others used the opportunity to make a broader point about the entertainment industry: “Regardless of whether Ellie Kemper was in the KKK or whatever, it’s unethical to be a movie actor from a rich family. When you see someone who’s made it in Hollywood you assume they spent time waiting tables & playing extras in laxative commercials to make ends meet.”

Kemper’s reps have not responded to TheWrap’s request for comment. The “Unbreakable Kimmy Schmidt” actress continued to trend on the microblogging site well into Tuesday morning, though she made no public statement.