Elon Musk is giving Twitter’s remaining employees until Thursday evening to decide whether they want to commit to the social media giant’s “extremely hardcore” work or jump ship.

“This will mean working long hours at high intensity,” Musk wrote in a memo to employees, according to the Washington Post. “Only exceptional performance will constitute a passing grade.”

The memo reportedly gives staff until 5 p.m. ET on Thursday to fill out an online form to confirm their commitment to staying at Twitter. Individuals who do not respond by the deadline will reportedly be offered three months of severance pay. 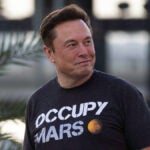 Also Read:
Elon Musk Fires Twitter Employees Who Publicly and Privately Challenged Him: ‘This Man Has No Idea WTF He’s Talking About’

The latest move comes as Twitter’s workforce has already been cut by 50%. In response to the layoffs, the Tesla chief executive said there is “no choice when Twitter is losing over $4M/day.”

The world’s richest man also fired top executives Parag Agrawal, Ned Segal and Vijaya Gadde and dissolved the company’s board of directors following the closing of his $44 billion acquisition on Oct. 27.

In addition to working longer hours, Musk has mandated that Twitter employees must return to the office full-time, with some exceptions.

In a separate email to staff earlier this month, Musk warned that “there is a good chance Twitter will not survive the upcoming economic downturn” without “significant” subscription revenue.

“We need roughly half of our revenue to be subscription,” he said.

In the second quarter of 2022, Twitter reported total revenue of $1.18 billion, with advertising revenue accounting for $1.08 billion.

In response, Musk has been pushing Twitter employees to rollout the company’s Blue Verified feature. After a first launch attempt resulted in chaos, the relaunch has been postponed to Nov. 29.