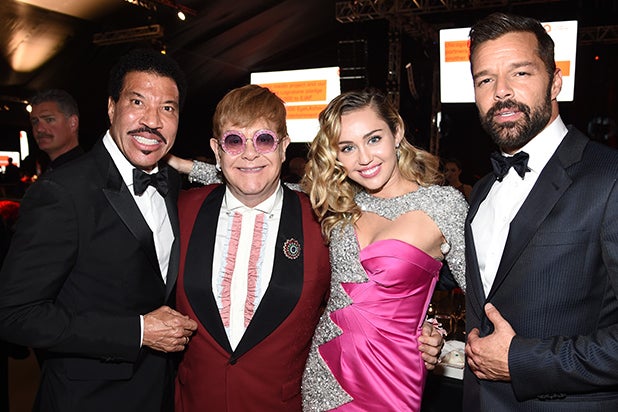 Sir Elton John introduced the guests at his annual Oscar viewing party and fundraiser for the Elton John Aids Foundation Sunday night to a band that talent manager Scooter Braun thinks will be music’s next big thing: Great Van Fleet.

A few weeks ago, Bill Simmons had a burning question for Braun, who visited his popular pop culture podcast “The Ringer”: Who’s a musical act that Braun’s not involved with that’s destined for greatness?

“Great Van Fleet,” Braun fired back without missing a beat. 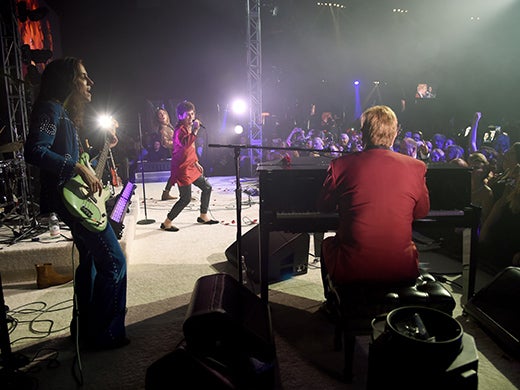 Speaking off the cuff, Braun pointed to the Led Zeppelin sound-alike rockers as the pinnacle of a wave of guitar rock that is bubbling up behind the current moment of hip-hop domination.

Braun nurtured Justin Bieber and Ariana Grande to global stardom and, more recently, Kanye West foisted himself on Braun, insisting that he become his manager.

“Whoever said rock music is dead is dead wrong,” Sir Elton said as he introduced the band at his party. GVF are three brothers and a friend from Michigan who were one of the breakthrough acts of 2017.  They will play on the opening day of Coachella next month. 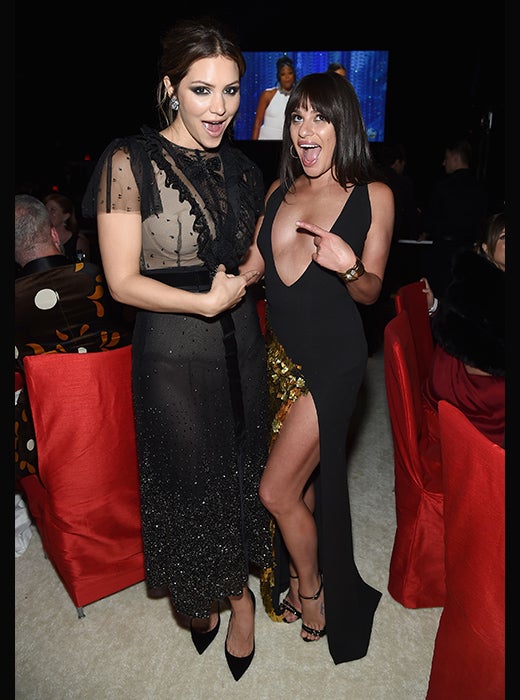 Katharine McPhee and Lea Michele are fired up to see each other. (Getty Images for EJAF)

John, the host of the most exclusive and glamorous Oscar viewing party outside the Oscar ceremony itself, joined GVF on stage to close the 26th edition of his AIDS fundraiser in West Hollywood.

Their joint rendition of “Saturday Night’s All Right for Fighting” capped a night that refueled the Elton John Aids Foundations coffers with $5.9 million to continue the fight to end AIDS.

Also Read: Elton John Walks Offstage, Goes Off on Unruly Fans: 'You F--ed It Up' (Video)

“This is our premiere fundraiser in America,” Foundation Chair David Furnish said of the Bvlgari-sponsored evening. “To have that against the backdrop and glamour of the Oscars is wonderful.”

In a multi-room tent in West Hollywood Park, celebrity friends of the cause took center stage to make direct appeals during commercial breaks. Others retreated to their assigned seats at the 80-odd round tables in the dark and moody main tent. 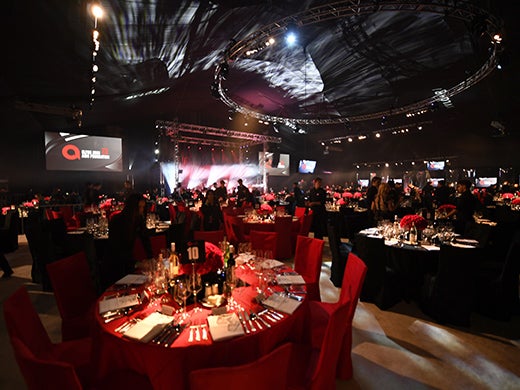 It was easy to hide and sip bubbly all night if you wanted to. Despite canvassing the party for hours, The Party Report only caught a glimpse of familiar faces, like Caitlyn Jenner, Chris Hardwick, Andie MacDowell and Seth Green when seeing their photos later in the night.

More obvious were the marquee names at Sir Elton’s head table, populated with Miley Cyrus and Liam Hemsworth on his immediate right. CNN’s Don Lemon made the head table cut and was seated alongside Ricky Martin, Lionel Richie and Sir Lucian Grainge, the chairman of Universal Music Group. 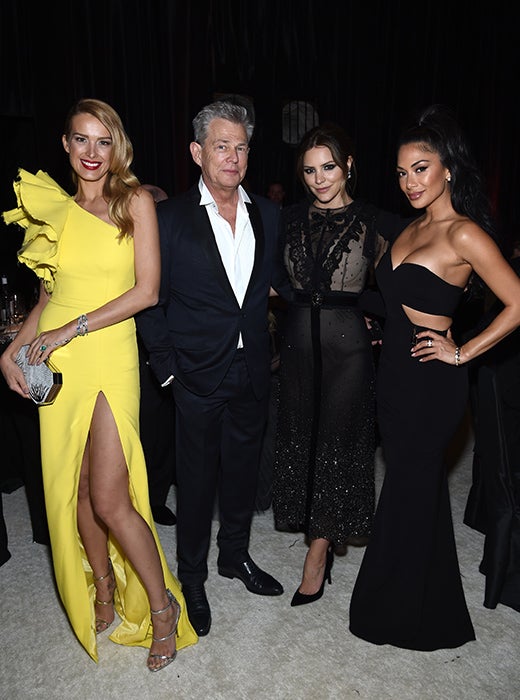 Per usual, Milan Blagojevic was the axis of a slew of high fashion models posing throughout the space. Petra Nemcova, Heidi Klum and Viktoriya Sasonkina were all on scene. The organizers of the Life Ball, a more flamboyant and aggressively festive AIDS fundraiser in Vienna each summer, were also in the room enjoying a turn as guests.

Your personal NFL allegiances will dictate how you view this two-shot of billionaire NFL owners and their significantly younger blonde girlfriends. 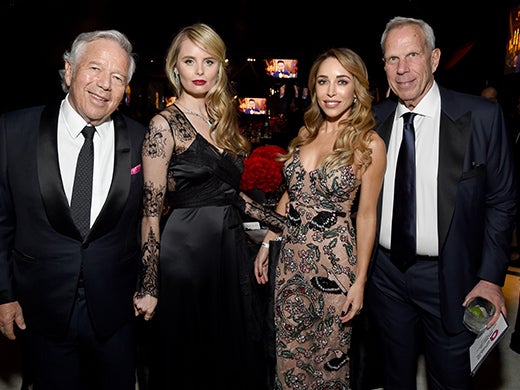 Patriots owner Robert Kraft (left) and New York Giants owner Steve Tisch (right) have faced off in two Super Bowls, both upset wins for the Giants. They sat a few seats away from each other at the head table. Hailing from Massachusetts, I look at this and feel like Charlie Brown. New Yorkers will likely cackle like Lucy.

In any event, Tisch disappeared midway through the night, headed west down Santa Monica Boulevard and resurfaced at Vanity Fair’s bash in Beverly Hills.

Tisch had co-hosted the early years of the VF party with Graydon Carter until bowing out in 1996. He told Carter that hosting the hot ticket event made his life difficult. Business associates reportedly told Tisch that not getting an invite to “his” party was “challenging their business relationship.”

“I didn’t need that aggravation in my life,” he told Vanity Fair years later.

Also Read: At the Oscars' Governors Ball, Relief at a Break From All the Scandal

That event is anything but aggravating for many others. The competing bashes support each other on Oscar night. One of John’s guest paid $52,000 in a live auction to leave the party immediately and go directly to Vanity Fair.

“It’s a walking, talking Madame Tussaud’s,” the suave auctioneer touted before dropping the gavel. Less suave: an oddly touted magician who proved to be a mismatch performer at the event. 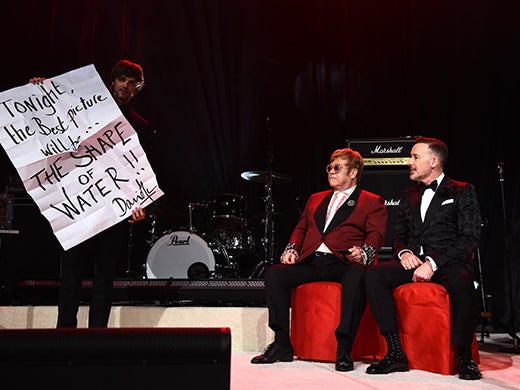 His big trick? Calling “The Shape of Water” to win Best Picture and locking that prediction in a suspended case above the stage at the start of the night. If that’s magic, then coming to a Vegas showroom this summer, TheWrap’s Awards editor/magician Steve Pond. 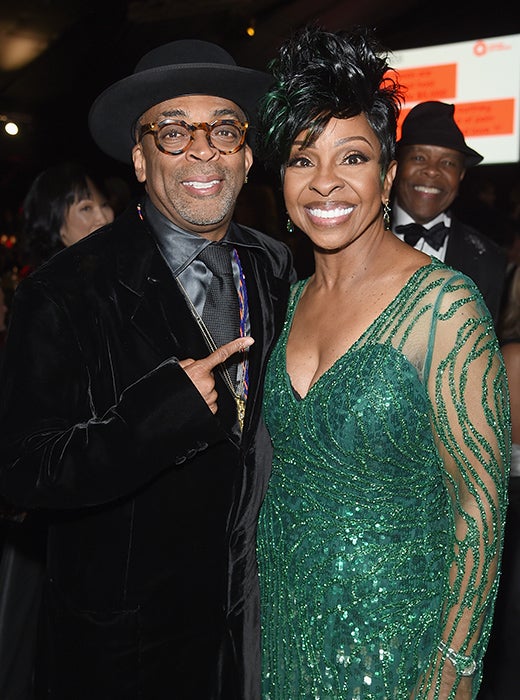 Back in West Hollywood, Jordan Peele’s win for Original Screenplay provided a bright moment in the room. At table 19, Spike Lee applauded the win by drumming his table with both fists for about 20 seconds. His table mates included power producer Lauren Selig and an empty seat that had been saved with a place card for Ava DuVernay.

Billie Jean King is on the foundation’s board and a long time attendee. The Party Report saw her walking through the room hand-in-hand with Bernie Taupin.

“We were at the very first party,” King said on the way in. “It was at a small restaurant near Maple avenue near the Beverly Hills Tennis Club. There were about four tables and we were looking at (these little) TVs. People like Sylvester Stallone, Meg Ryan, Dennis Quaid and Lily Tomlin ‘stopped by.’ It’s beautiful what’s happened now (to the size of the event).”

As Sir Elton left the stage, he said, “Well, I can die in peace now.” 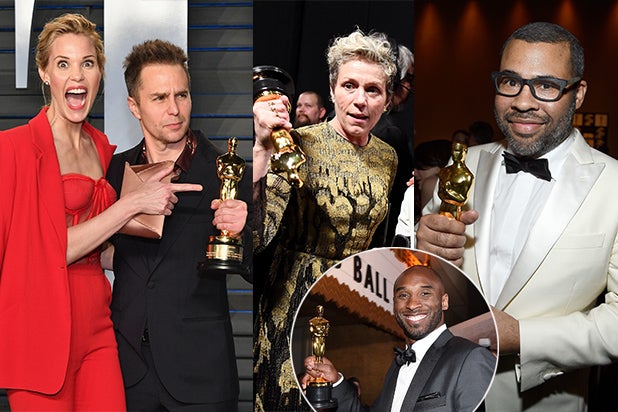 For more form inside the Oscar parties, click over here: