Watch the trailer for “Elvis & Nixon.” Go on, scroll down. Give it a quick peek. This isn’t so much a demand as it is a dare, because experiencing 2 minutes and 28 seconds of this film is already about two minutes too much of your time stolen away from you. Inoffensive as it is inconsequential, this first foray into big-budget filmmaking from director Liza Johnson (“Hateship Loveship”) is a painful disappointment from start to finish, a frustratingly safe and unimaginative effort that squanders the potential of its story.

In Johnson’s defense, there wasn’t much ripe material to bungle here. The log-line is simple: billed as an “untold true story,” the movie chronicles the two days leading up to the monumental meeting between Elvis Presley (Michael Shannon) and President Richard Nixon (Kevin Spacey). Interest in this unlikely encounter stems from an iconic photograph taken Dec. 21st, 1970, which finds Nixon (maniacally grinning) and Presley (in a somnambulant daze) shaking hands. And it’s this image — representing the unlikely partnership between the King of Rock and the King of Deceit — that is claimed to be the most requested photo in the National Archives.

Inexplicably written and approved by three screenwriters (Joey Sagal, Hanala Sagal and Cary Elwes), the movie attempts to recreate the conversation that transpired before that photo immortalized the moment. The stakes in “Elvis & Nixon” are at a historic low; before the King is granted access to the President, he must first make an unofficial request, which he does by ambling up to the front gate of the White House, clutching a handwritten note. The note illuminates his ideological alignment with President Nixon: They both long to rid the country of drugs, hippies, poverty, and The Beatles. Oh, yes, nothing jumpstarts a friendship more than mutually disliking something or someone.

Johnson does what she can with the dialogue she’s been given, but the movie is mostly plotless. And that’s probably because there is not much of a story to be told here. A great deal of time is allocated to Shannon playing dress-up as Elvis, strutting around from one scene to the next. As if on an endless, depressing loop of abhorrent cinema, nearly every interaction unfurls the same way:

Step 1: Elvis wants to do something.

Step 2: Elvis then does that something.

Step 3: In the process of doing that something, Elvis sees other human beings on the street or the airport or a restaurant.

Step 4: That person, whether a man or a woman, either remains silent in awe or uncontrollably squeals and swoons.

Step 5: Depending on the gender of that person, Elvis then flirts or says, and I’m not kidding, “Thank you. Thank you very much.” 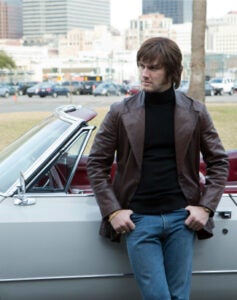 The bar for biopics has never been particularly high. They’re routinely boring cradle-to-grave slogs that suffocatingly pack too much information in about their subject. Refreshingly, “Elvis & Nixon” takes an antithetical approach, with no backstory whatsoever being relayed here. Johnson understands that no one needs a primer on these towering figures. However, the film also manages to lack specificity. Although this is one singular moment in time, there’s a lack of detail throughout. The costumes are all-too-recognizable as such, as though everyone involved were putting on a high school theater production. The closest we get to understanding Presley’s headspace comes in the scenes between him and his right-hand man, Jerry Schilling (Alex Pettyfer).

Jerry and Elvis discuss the perils of fame, the unending superficiality of the industry, and how Elvis walks into a room and no one really sees him for who he is. He talks about feeling like just a commodified figure rabid fans want to take a photo with, and yet even this dialogue feels strikingly forced and disingenuous. Of course, there’s something to this feeling of someone being bought, sold and monetized like a shiny object in a toy shop, but not even Shannon — arguably one of the best working actors in contemporary cinema — can salvage this lifeless writing.

At 87-minutes, the movie steadily and drearily builds to a protracted, anticlimactic scene between Shannon and Spacey. The anticipation for this exchange of dialogue between Presley and Nixon is nonexistent by the time the scene occurs. In conversation, they tell the outsized stories of themselves, both self-described heroes in their own rags-to-riches narrative. Presley expresses his desire to be given a badge as a “federal agent-at-large,” while Nixon — desperate for the youth vote — accommodates his bizarre demands. Spacey, master of impressions, knocks another one out of the park here, but it’s merely an impression, one that could comfortably fit alongside the ones he did of Jack Lemmon or Al Pacino on the “Inside the Actor’s Studio.”

There isn’t a moment in this somehow too-long movie where these actors effectively portray Elvis or Nixon. Shallow characterization is what we’re given in spades here, along with lousy screenwriting, mediocre comedy, and feigned interest in 1970s politics and Americana. At best, “Elvis & Nixon” is a movie designed and destined to be on TV, where families on the couch will read the enticing description, watch for five minutes, and then instinctively change the channel, their lives entirely unchanged.