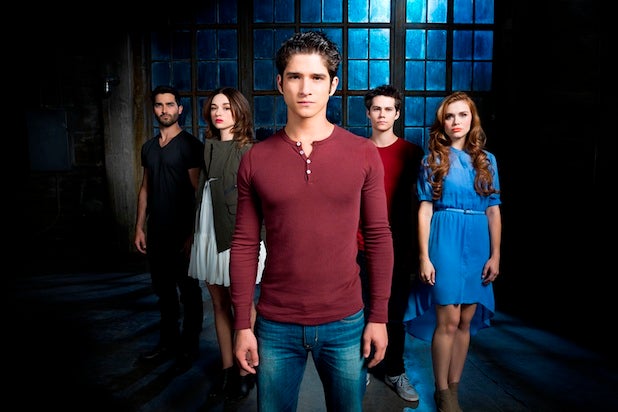 MTV has greenlit the new Alaska-based series “Slednecks,” the extreme dance competition “Beyond Dance,” and “One Bad Choice,” about the consequences of a single bad decision. The network announced the new series Thursday at its upfront presentation to advertisers in New York.

The network previewed the new shows at a presentation at New York City’s Beacon Theater that was stocked with MTV stars.

“Slednecks,” an Arctic answer to “Jersey Shore,” features Alaksa teens snowboarding, shooting, and doing shots of caribou blood. Twentysomethings profiled on “One Bad Choice” talked about arrests and friends dying. And the “Beyond Dance” competitors danced on the side of buildings.

Advertisers laughed along with trailers for “Faking It” — about high school girls pretending to be a lesbian couple — and gasped at a twist in “Happyland” in which a forbidden love turned out to be truly forbidden. (A girl was told her crush was also her half-brother.) Taking a page from Miley Cyrus‘s MTV VMA performance, the show, set at a theme park, mixed bare skin and animal costumes.

At the upfront, at the Beacon Theatre, “Real World” and “Girl Code” for new seasons. And MTV2 will debut a second season of “Nick Cannon Presents: Wild ‘N Out” this summer.

The network also plans the new documentary series “9 Days and Nights,” which follows an artist at a turning point in his or her life. The first 60-minute installment will premiere in June and feature British singer-songwriter Ed Sheeran, with appearances by Taylor Swift and Pharrell Williams. The series is a continuation of the documentaries featuring such artists as Lady Gaga, Miley Cyrus, and Drake.

Here are the shows on MTV’s slate:

New 60-minute documentary film that will take fans inside the world of British singer-songwriter Ed Sheeran, one of the fastest-rising stars in pop music today. With extraordinary, intimate access to Sheeran, this film will be a portrait of a young artist at a critical juncture in his life, filled with the energy of a career that he hopes is largely ahead of him.

Still healing from tragic losses, Scott, Stiles, Lydia and Kira return to a new semester of school with more human worries than supernatural, while also trying to help their new friend, Malia, integrate back into society. But Kate Argent’s surprising resurrection brings a new threat to Beacon Hills along with the emergence of another mysterious enemy known simply as The Benefactor.

“Finding Carter” is a family drama that centers on Carter, a teenage girl who thinks she has the perfect life until one night after a police bust at a high school party she is told that the woman who she believes to be her biological mother actually abducted her as a toddler.

“Ridiculousness” hosted by Rob Dyrdek returns for a fifth season with some of the most insane viral videos in history. Watch Dyrdek, along with co-hosts Sterling “Steelo” Brim and Chanel “West Coast,” take on all new categories.

From the mind of Rob Dyrdek comes a cooking competition show with a comedic twist that is truly unlike any other, where it takes mundane munchies and elevates them to a fully baked art form. Hosted by Chef, Restaurateur and food personality, Eddie Huang, “Snack-Off” is a half-hour show where a group of amateur chefs battle it out in an array of “snack” inspired challenges vying not only for a cash prize but to have their recipe included in the “Snack-Off cookbook and the coveted spork necklace. The panel includes supermodel Chrissy Teigen, master chef Jason Quinn and comedian Yassir Lester.

“Slednecks” is a new, half-hour docu-series following a group of ‘outdoor tough’ friends living in the modern-day Wild, Wild West of Alaska.  It’s an inside look at their unique lifestyle where the world can be tougher and more dangerous than anywhere else in the lower 48. Yet these “Sled-necks” make the most of what they have, always making sure they have a good time doing it and maintaining the close bonds they have forged as friends.

“One Bad Choice” is a new series that explores the consequences of young people who made a single, terrible decision that irrevocably changed their lives forever. Shocking, surprising, and deeply emotional, “One Bad Choice” takes viewers on a rollercoaster ride filled with twists and turns, suspense, drama and redemption through scripted storytelling based on true stories.

“Beyond Dance” is a weekly hour-long competition show that challenges professional dancers to perform and compete in ways that push well beyond traditional dance.  Led by premiere choreographers Rich & Tone who have worked artists ranging from Miley Cyrus to Michael Jackson, the dancers will battle it out in extreme challenges that take performances to the next level.  Whether it’s dancing on the side of a building, underwater, or in zero gravity, these dancers will have to push themselves farther than ever for a chance at a cash prize and the title of “Beyond Dance” champion.  Hosted by Jason Dundas (VH1’s “Big Morning Buzz Live”).