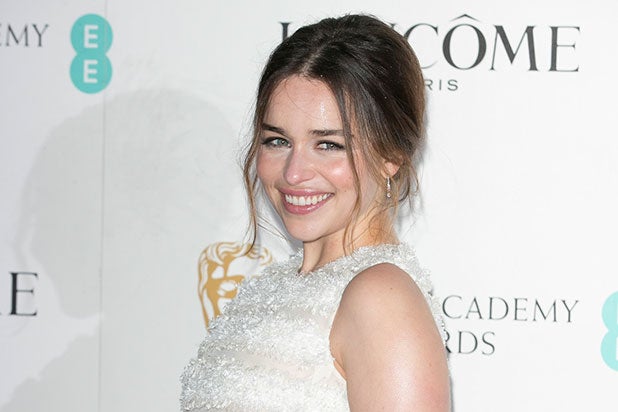 “Game of Thrones” star Emilia Clarke has shared her ideal ending for her character, Daenerys Targaryen, and it involves some barbecued goat and a lot of nudity.

“I want to see Daenerys and her three dragons share the throne,” she told Glamour. “Eat goat they’ve barbecued. And bring back all the pretty boys, get them to take their trousers down, and be like, ‘I’m now the queen of everything! I’d like close-ups of all the boys’ penises, please.'”

Her ideal ending would certainly balance out the extreme gender issues and the treatment of female characters “Game of Thrones” has been criticized for since the series debuted in 2011.

Clarke has previously spoken out about the depiction of women in “Game of Thrones,” saying that the show is actually a feminist one.

“That’s what’s beautiful about ‘Game of Thrones’ – it’s depiction of women in so many different stages of development,” she told Entertainment Weekly. “There are women depicted as sexual tools, women who have zero rights, women who are queens but only to a man, and then there are women who are literally unstoppable and as powerful as you can possibly imagine.”

Even Sophie Turner, who plays Sansa Stark in the series, believes the show is feminist.

“I think that the depiction of women is a nice depiction of women,” she had told The Wall Street Journal. “Back then, women didn’t have half the power they have in the show. This isn’t a popular opinion but it’s definitely a feminist show because as I say, back then women didn’t have the power to control kingdoms and they weren’t becoming the strongest characters in life. In this show, some of the strongest characters are the female characters. But we have to cater to the times they are in so there are these social boundaries put upon them and they break out of them in the show.”

The sixth season of “Game of Thrones” will debut on HBO on April 24.