Marvel fans might remember that it was Emily Blunt, not Scarlett Johansson, who was the first choice to play Black Widow in “Iron Man 2.” Now, Blunt wants to “clean up the story” about why she turned down the iconic role — and why we probably won’t see her in any future superhero flicks, either.

Speaking with Howard Stern on Tuesday while promoting “A Quiet Place Part II,” Blunt explained that she originally turned down the part of Black Widow because she was already contracted to star in the 2010 film “Gulliver’s Travels.” 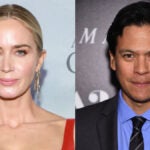 That said, Blunt admitted she’s not the biggest fan of the superhero genre. Elsewhere in the interview, she dispelled a rumor that she and her husband, John Krasinski, would be playing the leads in the next “Fantastic Four” film, brushing it off as “fan-casting.” As a result, Stern asked Blunt if the superhero genre itself was “beneath” her.

“It’s not that it’s beneath me,” she responded. “I love ‘Iron Man’ and when I got offered Black Widow I was obsessed with ‘Iron Man.’ I wanted to work with Robert Downey Jr. — it would’ve been amazing. But I don’t know if superhero movies are for me. They’re not up my alley. I don’t like them. I really don’t.”

She continued: “It’s been exhausted. We are inundated — it’s not only all the movies, it’s the endless TV shows as well. It’s not to say that I’d never want to play [a superhero]. It would just have to be something so cool and a really cool character, and then I’d be interested.”

“A Quiet Place Part II” — a movie with zero superheroes in it — hits theaters May 28. Check out a clip from Blunt’s interview with Stern above.