The second season of the Emmy-nominated Lily Collins-led comedy will premiere Dec. 22. You can watch the date announcement teaser here or above, now.

re and via the video above.

Here’s the official description for “Emily in Paris” Season 2: “Now more entrenched in her life in Paris, Emily’s getting better at navigating the city but still struggling with the idiosyncrasies of French life. After stumbling into a love triangle with her neighbor and her first real French friend, Emily is determined to focus on her work — which is getting more complicated by the day. In French class, she meets a fellow expat who both infuriates and intrigues her.” 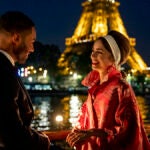 The first season of Star’s “Emily in Paris” — which was originally set to debut at Paramount Network (and TV Land before that) before moving to Netflix in July of last year — premiered in October 2020. The show was renewed for Season 2 one month later.

“Emily in Paris,” which became Netflix’s most-viewed comedy series of 2020 and was nominated for Outstanding Comedy Series at this year’s Emmys, is produced by MTV Entertainment Studios, Darren Star Productions and Jax Media.