The ratings are in for the week of December 20-26 and Netflix boasted the two most-binged shows, “The Witcher” and “Emily in Paris.”

The wildly popular and fashion-heavy “Emily in Paris” starring Lily Collins, skewed overwhelmingly female, with 77% of the audience being women, according to Nielsen data released on Thursday.

All 20 episodes of the second season dropped on Dec. 22, with viewers drawn to the 20something’s adventures around Paris, her dream job with a luxury marketing company, and of course, those clothes.

With two seasons to binge, “Emily in Paris” made the Netflix global Top 10 list the week of its premiere, and on Jan. 10 the streamer gave the go-ahead for a third and fourth season. 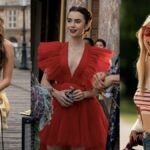 “Emily in Paris” is from creator and showrunner Darren Star. The series is produced by MTV Entertainment Studios, Darren Star Productions and Jax Media. Tony Hernandez and Lilly Burns serve as executive producers for Jax Media, other executive producers include Star and Andrew Fleming. Raphaël Benoliel, Stephen Brown, Collins, Shihan Fey and Jake Fuller are producers on the show.