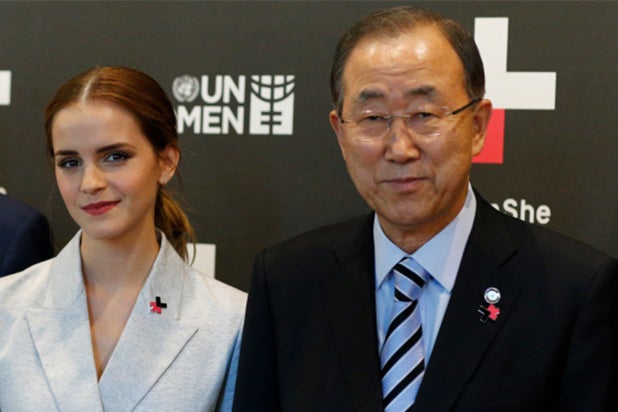 Emma Watson made an impassioned plea to men and boys to help bring about gender equality — and help put an end to the characterizations of feminism as “man-hating.”

The former “Harry Potter” actress was speaking in her role as a United Nations’ Goodwill Ambassador. She made the speech at the U.N. Headquarters Saturday in New York to kick off the “HeForShe” campaign to fight the inequality women face globally.

“The more I spoke about feminism, the more I realized that fighting for women’s rights has too often become synonymous with man-hating,” she said. “If there is one thing I know for certain is that this has to stop.”

Gender equality must be seen as a men’s issue if things are to change, she said.

“I want men to take up this mantle so their daughters, sisters and mothers can be free from prejudice but also so their sons have permission to be vulnerable and human too and in doing so, be a more true and complete version of themselves,” she said.

She said that both men and women should feel free to be strong.

Wonderful men out there. I'm launching a campaign – #heforshe. Support the women in ur lives and sign up here now! ❤️ http://t.co/EXa64CncgP

“It is time that we all see gender as a spectrum instead of two sets of opposing ideals,” she continued. “We should stop defining each other by what we are not and start defining ourselves by who we are.”

She even had an answer for those who question how her turn as Hermione Granger qualified her as an expert on gender equality.

“You might think: who is this Harry Potter girl?” she said. “What is she doing at the UN? I’ve been asking myself the same thing.

“All I know is that I care about this problem and I want to make this better. And having seen what I’ve seen and given the chance, I feel my responsibility to say something. Edmund Burke said all that is needed for the forces of evil to triumph is for good men and women to do nothing.”