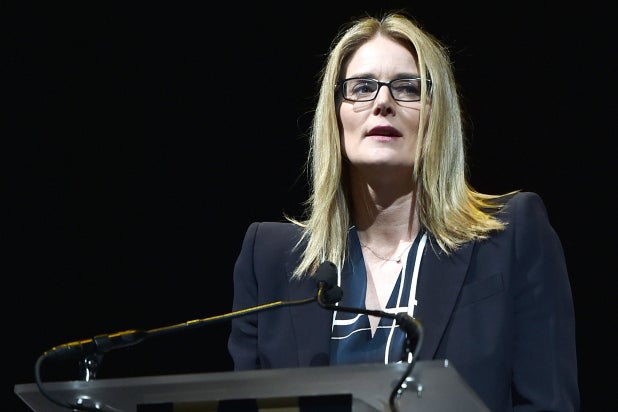 Emma Watts has resigned as president of production at Twentieth Century Studios, according to individuals familiar with the departure said on Thursday.

Watts came over to Disney after the media and entertainment company acquired the TV and film entertainment assets from Fox last March for $71.3 billion. Watts had spent two decades at Fox.

“Emma has made many wonderful contributions to Fox over the past two decades, shepherding a number of memorable films to the screen,” Walt Disney Studios co-chairmen Alan Horn and Alan Bergman said in a joint statement. “We truly appreciate and thank her for her commitment and partnership in overseeing the transition in this past year and wish her the best.”

An individual familiar with Watts’ thinking told TheWrap that the executive wasn’t forced out or asked to leave, but instead realized that the culture and focus at Disney was different and that the job she was promised, wasn’t exactly what she thought it would be, or what she wanted at this point.

Watts’ sent an email to her staff on Thursday informing them of her plan to step down, in which she mentions going to Horn and Bergman with the realization that it was time for her to explore new opportunities.

“Disney has an immensely gifted and creative leadership team, and I am so thankful to have had the opportunity to be a part of the expanded company,” Watts wrote in her email to staff. “Even more so, I am deeply grateful for the time I’ve spent with all of you. Thank you for your dedication to supporting great talent and storytelling, and above all, for your friendship.”

There is no indication as to what the executive’s next move will be.

Watts’ existing creative team will remain in place at Disney, according to individuals inside the studio, and a new leader is expected to be named in the coming weeks. Her resignation will not have any impact on Twentieth Century Studios’ development or release slate.

Mergers can be unwieldy, with a clash of cultures and operations. Even Disney CEO Bob Iger acknowledged the fact during the company’s fiscal third-quarter conference call with investors that mergers often are smooth.

Disney’s acquisition of Fox has seen many other executives leave the studio and hundreds of employees get let go. The company has also been reevaluating how to operate the Fox brand under Disney and what the studio will look like.

The studio also recently amicably called it quits on the long-standing film production deal Fox had with Peter Chernin’s Chernin Entertainment. The split was one resulting in cultural and business differences, with Disney’s aversion to bringing on third-party partners to finance its films.

Read Watts’ email to staff below:

I am writing to you today to share that, after much reflection, I’ve made the difficult decision to step away from Twentieth Century.

Over the past many months, it has been my top priority to continue to foster great filmmaking while leading this team successfully through the integration period with Disney. After reaching this point, I approached Alan and Alan, realizing that it was now time for me to pursue new opportunities.

I started at Fox 22 years ago — “Titanic” was in theaters, George Lucas had just announced his second “Star Wars” trilogy, and “X-Men” was in development. I was a young creative executive eager to learn the business, and from day one I was welcomed. Who knew that together we would add “Night at the Museum,” “Bohemian Rhapsody,” “The Martian,” “Deadpool,” “Logan,” Steven Spielberg’s upcoming “West Side Story” and, of course, Jim Cameron’s “Avatar” to the studio’s already storied legacy. It was a front-row seat to an incredible evolution culminating in Fox becoming a part of one of the greatest media companies that continues to shape our industry on a global scale.

Disney has an immensely gifted and creative leadership team, and I am so thankful to have had the opportunity to be a part of the expanded company. Even more so, I am deeply grateful for the time I’ve spent with all of you. Thank you for your dedication to supporting great talent and storytelling, and above all, for your friendship.

I’ll be here and available for the next few weeks to support the transition process.