The story of Emmett Till continues to stir emotions in our collective hearts and minds nearly 70 years after his 1955 murder in Mississippi. Chinonye Chukwu’s acclaimed film “Till,” in theaters now, follows the inspirational plight of Emmett’s mother Mamie Till (played by Danielle Deadwyler) to advocate, educate and bring attention to the vicious hatred that led to her son’s violent death when he was 14 years old. 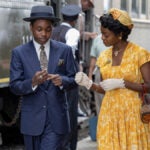 In a particularly poignant exchange, Tunnell choked up as she described how, as a makeup expert, she was asked if she could assist Bukowski, the cameraman and director of photography, after he had begun to weep.

“The first (assistant director) asked me to give Bobby a tissue,” Tunnell said, her voice beginning to break. “Bobby was over in the corner with his face in his hands, just crying. And for me that was — that was the toughest day for me. Because I know (Bukowski’s) heart and I know he’s kind person. And to see a grown man cry on set — I’ve never experienced anything like that. It’s still tough now.”

Bukowski got up from his seat to embrace Tunnell after she had spoken. Moments earlier, the cinematographer explained, “Unless you are impenetrable, (the story of ‘Till’) obviously affects you. It was very difficult emotionally. There were times when I was behind the camera and after a take I would have to step away. On that day, maybe I felt a hopelessness. Here I am, a 70-year-old man, and it’s still (the same) story. That’s what got to me: sixty years of my life and I’ve been seeing this horrible stuff going on.”

Metzger, the hair department head, also addressed the feeling of both pain and camaraderie that was present during the making of the film. 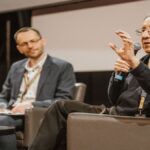 “I thought it was going to be Bobby that would make me cry, I had no idea it would be you,” said Metzger, while gesturing to her makeup colleague Tunnell. “During the whole process of filming, I couldn’t look at Bobby. He always had me emotional because he wears his heart on his sleeve and that’s why we love him.”

Metzger added that the crew was steadfast in its determination to give all they could to the film. There was an extreme amount of pressure because we had Emmett Till’s family on set. They were background actors and they were very involved in the film. So you had the heaviness of the subject matter, you had a pandemic happening, where we were all nervous. And so we just had to come up with creative ways to make it work.”