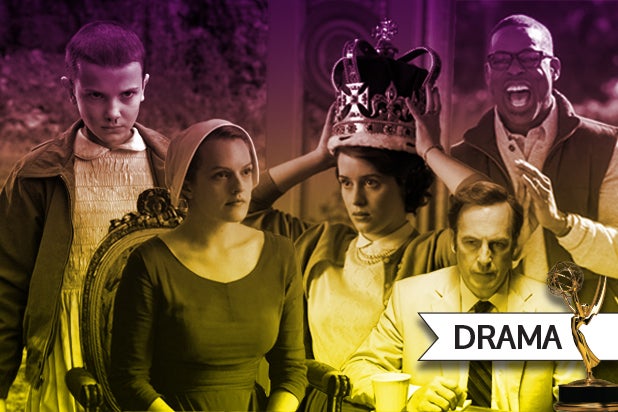 Every time I predict Emmy nominations, I start with the idea that Television Academy members are creatures of habit who will almost invariably vote for something they’ve voted for in the past rather than single out a new show.

But the drama categories in the 68th Primetime Emmy Awards will test that theory, because voters will have to contend with the biggest, deepest group of deserving first-year shows in years, maybe decades.

And they’ll do so without “Game of Thrones” and “Downton Abbey,” which together received 178 Emmy nominations (110 for “Thrones,” 68 for “Downton”) over the last six Emmy seasons. “Thrones” didn’t air a new season during the eligibility period, while “Downton” aired its final season in early 2016.

That narrows the number of returning shows for voters to check off their ballots, though the new kids on the block will also face challenges from past nominees that could easily return to the honor roll.

There are five new series that could have a strong chance of landing nominations here: “The Crown,” “This Is Us,” “Stranger Things,” “The Handmaid’s Tale” and “Westworld.” Other new contenders include “The Good Fight,” “Queen Sugar” and “13 Reasons Why.”

But the last time the Emmys nominated five new shows in this category (or its predecessors) was, well, never. The most they’ve ever nominated in one year was four, and that happened back in 1962 — and since then, the top drama series category has never had more than two first-year nominees.

Of the new shows, “The Crown” and “This Is Us” seem all but guaranteed nominations in the two slots vacated by “Thrones” and “Downton.” (NBC’s “This Is Us” will be the first broadcast-network nominee in this category since CBS’ “The Good Wife” in 2011.) For any of the other freshmen series to break in, voters will have to reject one of these 2016 nominees, all of which are still eligible: “The Americans,” “Better Call Saul,” “House of Cards,” “Homeland” and “Mr. Robot.”

It’s hard to imagine “Stranger Things” missing out, so we’re thinking it’ll supplant last year’s hot newcomer, “Mr. Robot.” But it took “The Americans” years to crash this category last year, and we expect it to be back, along with the much-loved “Breaking Bad” spinoff “Better Call Saul.”

That leaves two slots for a group of shows that includes two newcomers, “The Handmaid’s Tale” (a hot-button show in a political year) and “Westworld” (big and bold, the closest thing to “Game of Thrones” we’ve got, unless “American Gods” pulls off a shocker), and two returning shows, “Homeland” and “House of Cards.”

Let’s take one from Column A and one from Column B: “The Handmaid’s Tale” might be too timely to ignore, and “Homeland” is the only past winner in the running this year.

Predicted nominees (in order of likelihood):
“The Crown”
“This Is Us”
“The Americans”
“Stranger Things”
“Better Call Saul”
“The Handmaid’s Tale”
“Homeland”

Don’t rule out: “Westworld,” “House of Cards,” “Orange Is the New Black,” “The Good Fight”
Possible upset: “The Leftovers”

Last year’s nominees were Bob Odenkirk for “Better Call Saul,” Rami Malek for “Mr. Robot,” Matthew Rhys for “The Americans,” Kevin Spacey for “House of Cards,” Liev Schreiber for “Ray Donovan,” Kyle Chandler for “Bloodline,” with Malek winning the Emmy. This year’s new contenders include Sterling K. Brown for “This Is Us,” Anthony Hopkins for “Westworld” and Billy Bob Thornton for “Goliath,” among others.

Chandler is an Emmy favorite, with five previous nominations and one win, and the third and final season of “Bloodline” was released just before Emmy voting began. But the season was not as well-received as the first two seasons, and we think he’ll fall out to make room for Brown.

Last year’s winner, Tatiana Maslany for “Orphan Black,” might actually be on the bubble this year, with a strong group of newcomers looking to crash the party — particularly Elisabeth Moss in “The Handmaid’s Tale” and Claire Foy in “The Crown,” but also Evan Rachel Wood in “Westworld” and Christine Baranski in “The Good Fight,”

We think Moss and Foy are locks, and will likely be joined by returning nominees Keri Russell (“The Americans”), Viola Davis (“How to Get Away With Murder”) and Robin Wright (“House of Cards”). The last slot seems wide open — but we’ll go with past winner Claire Danes for “Homeland” over more recent past winner Maslany.

Also Read: Damon Lindelof Promises Justin Theroux Will Get Naked if 'The Leftovers' Gets Emmy Nominations

This is the single most crowded acting category, with 388 eligible performances. Once again, new shows “The Crown,” This Is Us” and “Westworld” are strong contenders, particularly with last year’s “Game of Thrones” nominees Peter Dinklage and Kit Harington out of the running.

We expect the slate to consist of three returning nominees and three representatives of those new shows.

Three of last year’s nominees — Emilia Clarke, Lena Headey and Maisie Williams from “Game of Thrones” and Maggie Smith from “Downton Abbey” — aren’t eligible, and the other two — Maura Tierney from “The Affair” and Constance Zimmer from “UnREAL” — are not among the front runners.

That’s good news for “Orange Is the New Black” star Uzo Aduba, a past nominee who’s looking to regain a slot, and for a lot of folks from new shows.

Emmy Showdown: 46 Actors Competing Against Themselves, From Melissa McCarthy to Jimmy Smits (Photos)

In an already crowded Emmy race, some actors have submitted themselves as many as four times in the same category (we're looking at you, Maya Rudolph) -- which means they can look in the mirror to find what's