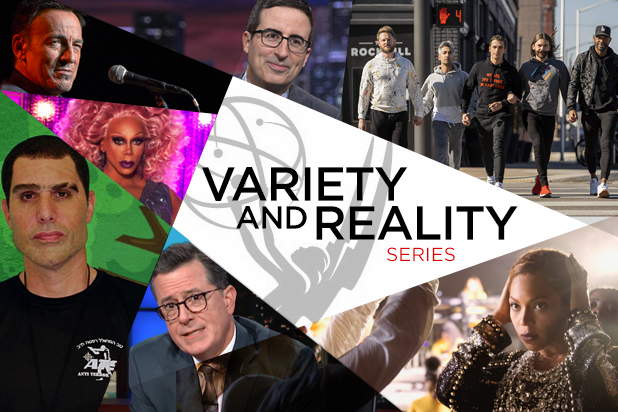 The Emmys’ variety and reality categories are in many ways the timeliest categories, and yet also the most unchanging. In the variety field, you’ll find late-night comedians like Stephen Colbert, Trevor Noah, John Oliver and Jimmy Kimmel, whose political humor is television’s most current and most barbed. Apart from perhaps MSNBC, this is the center of the anti-Trump resistance on TV.

But these are also categories in which Television Academy members find shows they like and continue to vote for them year after year, leading to long winning streaks for David Letterman, Jon Stewart, “The Kennedy Center Honors” and Jeff Probst in the past, and for Stephen Colbert, “The Amazing Race,” John Oliver and “The Voice” more recently.

Still, a few formidable newcomers are hoping to break in this year, from “Desus and Mero” to “Tosh.0” to “The Masked Singer” to Bruce Springsteen and Beyonce.

OUTSTANDING VARIETY TALK SERIES
Since “The Late Show With David Letterman,” “The Daily Show With Jon Stewart” and “The Colbert Report” went off the air, three shows have been nominated every year: “Last Week Tonight With John Oliver” (which has won all three years), “Jimmy Kimmel Live!” and “The Late Late Show With James Corden.” In a category known for repeat nominees, they all feel like locks.

In fact, this seems likely to become a complete repeat of last year’s lineup, with those three shows plus “Full Frontal With Samantha Bee,” “The Late Show With Stephen Colbert” and “The Daily Show With Trevor Noah.”

Jimmy Fallon has worked hard to get back in the mix and might be forgiven for mussing Donald Trump’s hair by now, but it’ll be a tough category to crack for him, or for Bill Maher or Seth Meyers, or for newcomers like “Desus and Mero” and “Patriot Act With Hasan Minhaj.”

Also Read: Emmy Predictions for Drama - It's Emmy's Last Dance With the Dragons

OUTSTANDING VARIETY SKETCH SERIES
This can’t be an exact repeat of last year’s slate of nominees, but it could look awfully similar. “Saturday Night Live” has more nominations than any show in history and is always a lock, and three other 2018 nominees — “At Home With Amy Sedaris,” “Drunk History” and “Tracey Ullman’s Show” — seem primed to repeat as well.

“Portlandia” can’t be a returning nominee because it’s no longer on the air, but voters might well just drop Fred Armisen’s other show, “Documentary Now,” in that spot. And if 2018 nominee “I Love You, America With Sarah Silverman” is vulnerable, that’s because there’s another show with America in the title from a different edgy comedian ready to take its place — Sacha Baron Cohen’s “Who Is America?”

If any of those fall out, Silverman definitely has a shot, and so do “I Think You Should Leave With Tim Robinson,” “Tosh.0” and “The Break With Michelle Wolf.”

But watch out for: “I Love You, America With Sarah Silverman,” “I Think You Should Leave With Tim Robinson,””Tosh.0,” “The Break With Michelle Woif,” “Kevin Hart Presents the Next Level”

OUTSTANDING VARIETY SPECIAL (LIVE)
Live musicals, awards shows and Super Bowl halftime performances — that’s what voters have liked in this category recently. The Oscars will certainly be nominated (they always are, and this year’s show is considered one of the better recent ones), and the Tonys should be back after not submitting their Kevin Spacey-hosted show last year.

But then things get a little rocky, because year’s biggest live musical was “Rent,” which was made up largely of pre-recorded dress-rehearsal footage after its lead actor broke his foot, and the Super Bowl, which featured Maroon 5, nobody’s idea of a classic halftime attraction. One of them will probably drop out and make room for “Live in Front of a Studio Audience: Norman Lear’s ‘All in the Family’ and ‘The Jeffersons.'”

That leaves room for the Golden Globes, which are nominated surprisingly often, or the Grammys, which are usually ignored despite the complexity of the production. But maybe the fresh take offered by first-time host Alicia Keys will give that latter show a boost.

Predicted nominees: “The Oscars,” “Live in Front of a Studio Audience: Norman Lear’s ‘All in the Family’ and ‘The Jeffersons’,” “72nd Annual Tony Awards,” “Rent,” “The 61st Grammy Awards”

OUTSTANDING VARIETY SPECIAL (PRE-RECORDED)
This category could look like the Grammys this year, with Beyonce, Bruce Springsteen, Taylor Swift and Paul McCartney all in the running with “Homecoming: A Film by Beyonce,” “Springsteen on Broadway,” “Taylor Swift Reputation Stadium Tour” and “Carpool Karaoke: When Corden Met McCartney Live From Liverpool,” respectively.

(McCartney is also double-dipping with “Paul McCartney: Live From NYC,” but Corden is his ticket to a nom.)

But the category is typically a mixture of music shows, comedy specials and, often as not, “The Kennedy Center Honors,” although that show may have lost a little luster when Trump became the first president not to attend. (After a streak of 10 straight nominations and five wins, it hasn’t been nominated the last two years, although this year’s honorees Cher and “Hamilton” made for spirited presentations.) Comics in the running include Hannah Gadsby, Ellen DeGeneres, Adam Sandler, Kevin Hart and Amy Schumer, all with Netflix specials.

OUTSTANDING STRUCTURED REALITY PROGRAM
Ever since the Television Academy decided that “Antiques Roadshow” was a reality program 14 years ago, that show has never not been nominated. Other strong bets: “Queer Eye,” the defending champ; “Shark Tank,” which has been nominated for seven years in a row (winning four times); and “Lip Sync Battle,” which has three straight nominations.

Other contenders include past nominees “Diners, Drive-Ins and Dives,” “Property Brothers” and “Who Do You Think You Are?” and current sensations “Tidying Up” and “Dr. Pimple Popper.”

But watch out for: “Diners, Drive-Ins and Dives,” Property Brothers,” “Tidying Up With Marie Kondo,” “MythBusters Jr.”

OUTSTANDING UNSTRUCTURED REALITY PROGRAM
The largest of the three reality categories, with 55 qualifying shows this year, the unstructured category has been used by voters in recent years to send a message of inclusion and diversity through shows like three-time nominee and two-time winner “United Shades of America,” “Born This Way,” “RuPaul’s Drag Race: Untucked” and “Gaycation With Ellen Page.” The last of those shows isn’t on the ballot anymore, but the others are and should land nominations.

“Intervention” is also a longtime favorite of voters in the category, as are rugged shows like three-time winner “Deadliest Catch,” “Naked and Afraid” and “Alaska: The Last Frontier.”

Or, you know, voters could have a change of heart and go for “Keeping Up With the Kardashians” and “Jersey Shore Family Vacation: Part 2.”

Also Read: 'Keeping Up With the Kardashians' Season Finale Is Most-Watched Episode in Three Years

OUTSTANDING COMPETITION PROGRAM
This might be the category with the lowest turnover rate in the history of the Emmys. “The Amazing Race” has been nominated 16 times in the category’s 16-year history, “Project Runway” 14 times (it wasn’t on the air for the category’s first two years), “Top Chef” 12 times (every season but its first), and so on.

So it’s reasonable to assume that the same lineup that has been nominated for the past two years — “Amazing Race,” “Project Runway,” “Top Chef,” “RuPaul’s Drag Race,” “American Ninja Warrior” and “The Voice” — will be back again this year.

But the biggest competition sensation of the past season was “The Masked Singer.” Can it break into the private club that is this category — and if so, what will it replace? It’s possible that “Masked Singer” could steal enough singing-show votes to supplant four-time winner “The Voice,” or that voters are finally tired of “Project Runway,” “Top Chef,” “American Ninja Warrior” or even 10-time winner “Amazing Race.”

It’s hard to find any real evidence that that might happen, but we have a feeling that silly costumes might nudge out high fashion.

But watch out for: “Project Runway,” “Ellen’s Game of Games,” “America’s Got Talent: The Champions,” “Making It,” “Chopped”

OUTSTANDING HOST FOR A REALITY OR COMPETITION PROGRAM
RuPaul Charles is sure to be defending his three-year winning streak for “RuPaul’s Drag Race,” and W. Kamau Bell likely to be in the mix as well for “United Shades of America.” But perennial nominees Heidi Klum and Tim Gunn aren’t on the ballot this year, which opens the doors for Amy Poehler and Nick Offerman (“Making It”), Nick Cannon (“The Masked Singer”), Marie Kondo (“Tidying Up”), the hosts of “Queer Eye” and many others, including past nominees Jane Lynch (“Hollywood Game Night”), Ellen DeGeneres (“Ellen’s Game of Games”), Phil Keoghan (“The Amazing Race”), Jeff Probst (“Survivor”), Alec Baldwin (“Match Game”) and Tom Bergeron (“Dancing With the Stars”), among others.

Really, it’s something of a free-for-all, though you have to give a slight edge to some of the folks who’ve been here before.

But watch out for: Ellen DeGeneres, “Ellen’s Game of Games”; Nick Cannon, “The Masked Singer”; Phil Keoghan, “The Amazing Race”; Tom Bergeron, “Dancing With the Stars”; Marie Kondo, “Tidying Up”