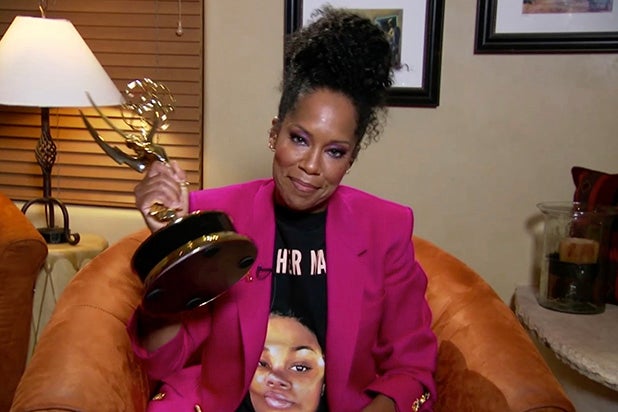 The 2020 Emmy Awards saw a noticeable uptick in the number of nonwhite acting winners, with “Watchmen” star Regina King’s fourth Emmy win and a surprise nod for “Euphoria” star Zendaya leading the way.

Zendaya, the youngest person to win the Outstanding Lead Actress in a Drama Series award, is also only the second Black actress to claim the title after Viola Davis for “How to Get Away With Murder.” Rudolph’s two wins this year marked the first of her career.

Overall, the winners represent a significantly more diverse group than last year, when just two of 19 winners were performers of color.

The 2020 Emmy nominations came under significant scrutiny in the months since nominations were announced back in July, with some praising the Television Academy’s increased recognition of Black actors, while others called out voters for shutting out Latinx performers.

Nonwhite performers made up 49 out of the 118 acting nominees this year, with Black actors making up the largest portion. “The Handmaid’s Tale” actress Alexis Bledel was the only Latinx actor to score a nomination, drawing condemnation from the Congressional Hispanic Caucus and a boycott from actor John Leguizamo.

Sunday’s broadcast featured a number of callouts to topical issues like the Black Lives Matter movement and the upcoming presidential election. King, while claiming her award for “Watchmen,” appeared in a shirt bearing the image of Breonna Taylor, the Black woman who was fatally shot by police officers in her home earlier this year.

“Black-ish” star and Emmys presenter Anthony Anderson also made reference to the fact that the awards show’s record number of nominations for Black actors unfortunately came in a year when nominees could not celebrate in person.

“This isn’t what it should have been,” Anderson said. “But I’m still rooting for everybody Black, because Black stories, Black performances and Black lives matter.”