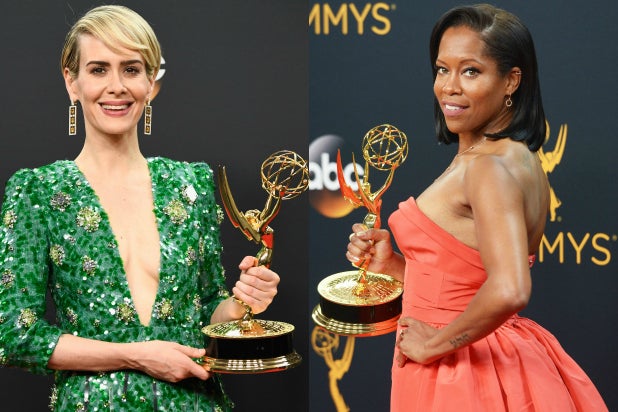 While many winners at this year’s Emmys left it all on the stage in their acceptance speeches, some saved their best quotes for afterward, in the press room.

TheWrap recaps some of the funniest, most revealing, most heartbreaking quotes from the backstage area of the 2016 Emmy Awards.

Read the quotes below.

“Game of Thrones” Producer Shows “Frasier” Some Love
After “Game of Thrones” broke “Frasier’s” record for most series Emmy wins with 38, D.B. Weiss had nothing but nice things to say about the classic sitcom.

“We love ‘Frasier’ and he had a long run and we’re sure somebody will come along and take this from us,” Weiss said. “We just hope it doesn’t happen until we’re all dead.”

and Are All Girl Power
As Regina King was speaking to the press, fellow Emmys standout Sarah Paulson was on deck. After King joked she was glad “there were no people from ‘People v. OJ Simpson’ in [her] category,” Paulson shouted out, “I love you, Regina.” The two then proceeded to joke back and forth across the room, reminiscing about a series they did in 2002 called “Leap of Faith.”

‘s Wife Gave Him Everything
Patton Oswalt not only paid tribute to his late wife during his acceptance speech, but also kept it up when he addressed reporters backstage.

“Every bit of growth that I’ve had in my career and in my writing and performing is because I met Michelle McNamara,” he said. “I met this woman who was just so much wiser and self-actualized of life than I was. I had convinced myself that I was self actualized and mature, but then I met the real deal.”

Louie Anderson Dedicates His Win to the Outcasts
After winning his first Emmy for playing an elderly woman on the FX comedy “Baskets,” Louie Anderson said that the unique nature of his role was meant to highlight those in society who feel left out.

“This show is all about not fitting in and then fitting in perfectly,” he said. “We live in a society of exclusion … I always had a special place in my heart for being different.”

Tackles Trump
“Transparent” creator Jill Soloway minced no words when it came to GOP Presidential nominee Donald Trump, referring to him as a “dangerous monster” and an “inheritor to Hitler” during her backstage comments. Read her full quote here.

Credits His Comedy Skill to His Britishness
John Oliver put his self-deprecating humor on full display when he explained why his British heritage makes him the ideal person to comment on America and American politics, leading to his latest win at the Emmys.

“I think comedians are usually outsider, so I think it helps that I’m an outsider as soon as my face makes a sound,” he said. “The British accent is worth about 80 percent more authority than I actually have. In the days of the empire it was 100.”

“Grease Live” Producer Confirms Sandy Was Alive
Despite a host of internet theories, the producer of “Grease Live” insists that Sandy was very much alive in their version of the classic musical.

“She was alive. She was very, very alive” Thomas Kail said. “All those internet theories were kicking around shortly after [‘Grease Live’ aired] and I will go on record and say ‘I love the internet.'”

Also Read: 'Game of Thrones' Breaks Record for Most Emmys Won by a Series

Courtney B. Vance Got Educated on the “People v. OJ Simpson” Set
Courtney B. Vance said that he purposely avoided watching archival footage of Johnnie Cochran, whom he played in the FX limited series “People v. OJ Simpson: American Crime Story,” and avoided following the real trial as he was an OJ fan once upon a time. But that gave him a chance to learn something new when he came to set.

“This was an opp to actually educate myself as to what actually happened … It was an educational process for me every day when the scripts came in,” he said. “It was a thrilling ride.”