Henry Winkler will pay tribute to “Happy Days” creator Garry Marshall at the Emmys on Sunday, telecast executive producer Don Mischer announced on Wednesday during the ceremonial unrolling of the red carpet outside the Microsoft Theatre in Los Angeles.

Winkler played Fonzie on the iconic sitcom, which also starred Academy Award-winning filmmaker Ron Howard. Marshall, who died last July due to complications from pneumonia, racked up four Primetime Emmy nominations over the course of his long career, but none were for the ABC series that ran for 11 seasons between 1974 and 1984. Winkler received three nominations, but never won an Emmy for his portrayal of the tough-guy greaser.

Emmys host Jimmy Kimmel and Television Academy president Bruce Rosenblum were also present at the event, where it was announced that Tori Kelly will sing during the In Memoriam segment, and Tom Hiddleston (“The Night Manager”) will appear on stage as a presenter.

“It’s the longest red carpet, and that is pretty exciting, because this is going to be the longest emmy show in history,” Kimmel joked.

Here’s a picture of the red carpet being unrolled. 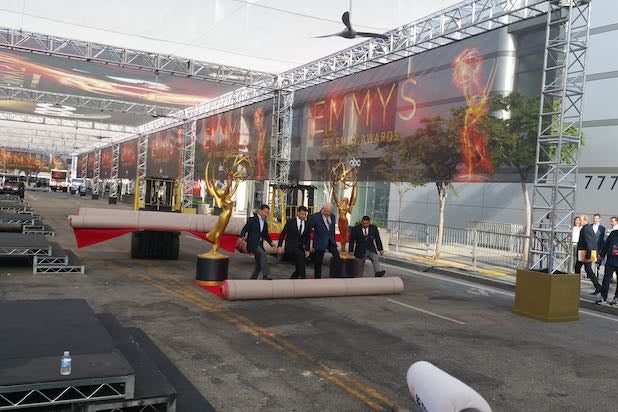 Remember the film and TV icon’s classic work as actor, writer and director