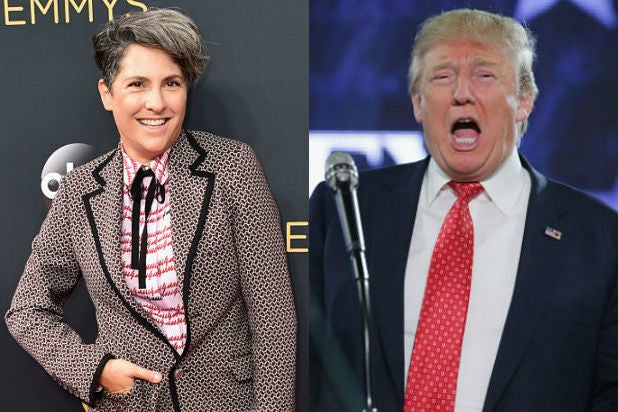 The Emmys’ political theme began when Jeb Bush, the former Florida governor who Trump mocked and vanquished during the primaries, made a surprise appearance at the start of the show, playing an Uber driver shuttling host Jimmy Kimmel to the awards ceremony.

Bush (aka Jeb!) made fun of his own failed campaign, and even the exclamation point he used at the end of his name on bumper stickers.

Kimmel hammered Trump during his Emmys opening monologue, calling Trump’s run for president “an elaborate plot” by Mark Burnett — the creator of Trump’s show “The Apprentice” — to tear the country apart.

Director Jill Soloway brought the fieriest condemnation of Trump, calling him a “complete dangerous monster” and an “inheritor to Hitler” backstage after her win for Best Director in a Comedy Series for Amazon’s “Transparent.”

“He calls women pigs if they don’t look like beauty pageant contestants,” she continued. “He blames Muslims and Mexicans for our problems. He makes fun of disabled people. This is ‘otherizing’ with a capital ‘O’ … He needs to be called out at every chance he gets for being one of the most dangerous monsters to ever approach our lifetimes.”

When Burnett took to the stage to collect an Emmy for reality TV singing competition “The Voice,” he took the occasion to hit on a touchy political point for much of the audience: the free media given to Trump.

“Hillary Clinton called me in the last few minutes and said to personally thank Jimmy Kimmel for an extra free five minutes of ABC publicity for Donald Trump,” Burnett said. “Thanks, Jimmy.”

“Veep” star Julia Louis-Dreyfus also weighed in on the election when she accepted her sixth-consecutive Emmy for the political comedy show.

“I’d also like to take this opportunity to personally apologize for the current political climate,” she said. “I think that ‘Veep’ has torn down the wall between comedy and politics. Our show started out as a political satire, but it now feels like a sobering documentary.”

“So I certainly do promise to rebuild that wall — and make Mexico pay for it,” Louis-Dreyfus added.

Which nominees would make history at the annual Television Academy event?

Julia Louis-Dreyfus could potentially break or tie three records this year. The first: If she wins her fifth Emmy for "Veep," she will tie Don Knotts, Ed Asner, and Candice Bergen for most Emmys won for playing the same character.